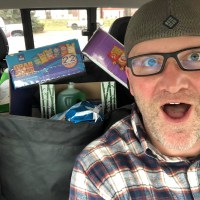 Howie Dittman is best known for his “Free Dad Hugs” after his post went viral on social media.

In reality, Howie’s free dad hugs are just a small part of what he’s about. Howie is a husband, a dad, a baseball coach, a sports fan, a hunter, an author of children’s books, and a full-time systems engineer. He’s also passionate about charity work, helping others, and organizing.

He’s the creator and administrator behind Helping Butler County, a Facebook page that organizes people, tasks, and events where he lives in Butler County, Pennsylvania.

A few years ago, Howie learned about the large homeless population in his community, living in the woods outside town. Area churches offered meals for homeless every day except Sundays. So Howie and a friend started showing up on Sundays under the train trestle with drinks and food—hot dogs, lasagnas, Mountain Dew. They fed people and stayed, getting to know them.

As more people heard about what Howie was doing, they offered to come and help, too. Howie and his crew started giving haircuts. They brought a generator out and watched Steelers games together while they ate.

People kept asking what else they could do. Howie wanted to keep the movement going, so he created the Helping Butler County facebook page. He started posting needs in the community and connecting people with the resources they needed.

It’s about meeting people in their own world, bringing change in the ways that are meaningful to them.

If there’s a house fire, Howie finds out exactly what the family needs and posts it, so the family receives clothes in the right sizes and seasons for what they need. They work to make sure kids have school supplies and food over the weekend, that veterans and the elderly have rides to appointments.

And it’s not just physical needs like clothes or food. A mother wanted advice on parenting teenagers—and after posting on the Helping Butler County page, was able to find someone to grab coffee with and talk.

A 99-year-old woman, legally blind, living by herself on a large lot, was paying someone to mow her lawn. A local business volunteered to step in. But the woman also wanted to go dancing, something she hadn’t done since 1978, when her husband had died. So Howie took her dancing.

Howie is passionate about bringing his community together as they meet each other’s needs. He knows it’s not easy, that it can be easy to focus on our differences.

“I hate labels. Why are we starting there?” he says. “Every time you do that, you bring with it all these assumptions that are most likely so inaccurate. And you’re starting there with things you now need to clear out of the way. We need to start with being people.”

It isn’t easy juggling all his different roles, but Howie does it because he loves it, because he knows the world can be scary as hell, and because he’s determined to make it better—one small step at a time, one more connection, one more need met.

He knows that peace sometimes begins in the unlikeliest of places, on a Facebook page.