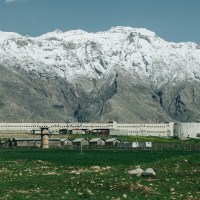 This is not an image most people associate with Iraq. Neither is this:

Snow-capped mountains, endless stretches of lush grass, and meandering streams… in Iraq. What?! Are we talking about the same Iraq we see in the news?

The truth is, spring in Northern Iraq looks like this for several weeks every year. When the rains wash down the usual browns and yellows of these mountains and foothills, dormant life takes a long, deep drink of moisture and turns this astonishing color.

Spring is as amazing here as it is everywhere else. A time of refreshment and renewal, of grass and flowers and returning warmth. This spring has been wetter than that of previous years though: the northern part of the Middle East has had record-breaking rainfall. All across Iraq and Iran and Syria, places which almost never turn green, are bursting with wild new life because of rain.

You would think lots of rain in an arid, frequently drought-stricken part of the world would be a good thing, right?

Well, it is. And it isn’t, especially when the saying “it never rains, it pours” is literal. As the climate of our world changes, prolonged falling of precious water is turning deadly for thousands of people in a region that doesn’t normally experience extended, heavy rainfall.

Infrastructure and government services are struggling to deal with widespread flooding. It’s been wreaking all kinds of destruction through Syria, Iran, and Iraq: people are dying and civil infrastructure is collapsing. Thousands in refugee camps, who have already lost everything to war, are faced with further loss and hardship as flood waters take what they have left, and crop yields are devastated by rain instead of drought.

Where highly prized desert truffles grow, the rains are delivering a bumper crop to the men who hunt for them in this season. Desert truffles are found throughout the Middle East and Africa in—as their name suggests—desert regions. Desert truffles are more abundant than their European cousins which fetch crazy prices all over Europe, but they incite no less fervor from consumers and hunters alike.

Foraging for fungi in Iraq is not the benign activity it would be elsewhere though, as truffle hunters are at risk of being captured and killed by ISIS, which is still operational in many parts of Iraq and Syria. The fall of its caliphate earlier this year has weakened the group, but definitely not ended its existence. ISIS’s insurgent activity continues, and kidnappings and killings happen with terrifying frequency.

In the communities you’ve brought life-giving medical services to, doctors are going to work by boat over land that’s turned into a great lake:

Remember the medical team in Iraq braving the flooded Tigris River to reach a community in need? The floods have come and gone and come again but your medical team stays—consistently providing primary care and support to communities on the brink.https://t.co/WcmnVHNOkv pic.twitter.com/eaxlXMphAi

But they’re going to work anyway, to ensure that the communities which are already vulnerable—of further terrorization by ISIS, of devastating loss due to natural disasters—continue to have the essential medical care that they need.

You love the people no one else will love. Thank you for continuing to stand with those who need your support the most.