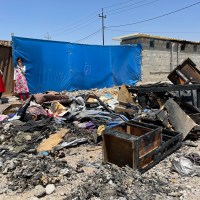 The bright blue tents almost appear cheerful in the camp for families displaced by war, until you see the charred remains of a fire that left five families devastated. Scraps of kitchen stoves, a woven rug, clothes, and cupboards lay beside the metal frame where the tents last stood. A remnant of a home.

More than 1800 families live in this camp. A massacre was committed in their hometown during the war with ISIS—all young men training to defend their communities. No one is sure who committed this atrocity, but these families are relatives of the accused. Their former neighbors won’t allow them to return home, despite many rounds of negotiations with government officials. The community that hosts them now are unwilling to allow them to stay permanently, so they live in a painful state of limbo.

Everything in their lives has been destroyed. Looking at the blackened remains of their temporary homes, which held all the memories, means and security they managed to gather since fleeing home seven years ago, you have to wonder how much loss these families can take.

Unfortunately fires like this happen sometimes in camps. An overloaded power strip started this fire, encouraged to spread by the unbearable summer heat, a steady wind, and nearby petrol tanks. Sometimes propane tanks used for cooking explode. Sometimes dodgy wiring sparks fires. These temporary camps were never intended to house families for so many years.

This time however, it wasn’t just people’s homes that were lost. The Uday family lost their 8-year-old son, Ali. When we speak with the family, his father is overwrought as he recalls the day of the fire. Ali’s uncle managed to pull several children out, but their son was lost in the chaos and smoke. Ali’s mom sits in silence. Disbelief and grief hang in the air.

Although the family has been given a new tent, they are staying with relatives, waiting to see if its location can be changed. “When I go there, I see my son. I smell him. How can I live there again?” Ali’s mom says. Despite the tragedy, the family does not blame the man whose burning tent originally started the fire. In fact, in the midst of their grief they ask us what we can do for him. “He’s lost everything,” they say.

This is exactly where our community of peacemakers steps into these situations. We can’t bring back Ali. We can’t undo the fire. We can’t make these displaced families feel wanted. But we can make them feel loved.

We sat with the families who lost everything in this fire, and asked what they most needed in order to move forward. Their lists were short, but completely out of reach for them: a tank to store water; a stove, refrigerator, and cooking fuel; rugs to cushion the floor for sleeping and sitting; a cupboard for clothes. We showed up later that same day with everything they asked for—as well as the practical items they didn’t ask for. There were sets of dishes and cutlery, pots and strainers, a set of basic spices, and other miscellaneous items we use every day but rarely think about.

Together we said to these families  “We see you. We stand with you, and we’re here.” Within a few days of these families losing everything, we were able to restore not just belongings, but dignity and choice and the semblance of a new home.

While being able to cook supper for your children, and keep their milk from spoiling in the heat doesn’t change these families’ uncertain future, it does help make their present more secure and assured. This ability to respond quickly to our friends’ needs is only possible due to the incredible surrounding community of global peacemakers. By drawing together and investing in people all around the world, we support communities so that individuals don’t have to stand alone, we stand side-by-side. We are creating that more beautiful world together.