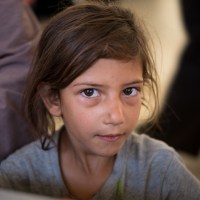 The city where Syria’s civil war began is back under government control, more than seven years after popular protests turned into a full-scale uprising.

Syrian government forces hoisted the national flag over Daraa, 60 miles south of Damascus, after weeks of fighting. Hundreds of civilians are believed to have died.

There are conflicting reports on how many are displaced here. Thousands are massed on the edge of the Jordanian border and the Israeli-controlled Golan Heights.

We have not been able to access Daraa yet in order to evaluate the need. But we will continue to press in, ready to show up for those caught on the frontlines.

What does this mean for Syria?

The world has mostly ignored Daraa, despite its symbolic importance.

This is where the Syrian uprising began. In March 2011, protesters took to the streets, calling for Syria’s president to step aside and demanding an end to a state of emergency that was in place for almost 50 years.

Government forces moved swiftly to put down the protests, and before long, all of Syria was engulfed in full-scale civil war.

The recapture of Daraa is a huge symbolic and strategic victory for the Syrian government. It means the “cradle of rebellion” is back under state control. The last major opposition-held territory is now Idlib, hundreds of miles to the north.

Victory on the part of Syria’s Russian-backed government is all but assured, though it’s anyone’s guess how much longer war will drag on.

Opposition forces in Daraa have reached a surrender deal (or a reconciliation pact, depending on your perspective) with the Syrian government. Amnesty has been offered to those who want to stay, though the terms of this deal are unclear.

Those unwilling to stay under government rule will be forcibly evacuated to Idlib, the last major opposition holdout.

According to some reports, Russian forces (who brokered the deal between the government and opposition) have warned those in Daraa not to go to Idlib, predicting it will become a “crematorium.”

An estimated two million displaced Syrians are already crowded into Idlib. Fighting there could have catastrophic consequences for them.

Strictly speaking, the Syrian civil war is approaching a decisive conclusion. But in reality, many lives still hang in the balance. And even when the fighting stops, who will help families here rebuild? As we’ve seen with our own eyes, huge swaths of Syria are destroyed or deserted.

No matter the outcome of Syria’s war, no matter who is on what side, we must stand with the people of this country. We must help them survive these (hopefully) last spasms of war.

As the battle turns toward Idlib, we will show up for families on the frontlines there, as we’ve done in so many places across Syria and Iraq. We will dig in and help displaced families across Syria—from Daraa to Aleppo, from Ghouta to Idlib—return home and rebuild after war.

We will not abandon the people of Syria. Neither will you. Please give today and show Syrian families they are neither forgotten nor alone.