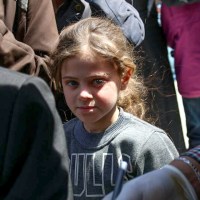 Syrian forces claim to be in full control of Douma, the last opposition stronghold in eastern Ghouta, where a chemical attack allegedly took place on Sunday. Thousands of families are now fleeing in the direction of the mobile clinics and emergency kitchen that you’re supporting.

Meanwhile, our colleagues and friends on the ground are holding their breath, waiting to see how the US and its allies respond to Sunday’s attack. They know that right now, two Tomahawk-armed US Navy destroyers are within striking distance of Damascus.

And they are terrified. No one knows where the US might strike or how far-reaching any retaliation might be. There is genuine, palpable fear in and around Damascus tonight.

The last message we got from our colleagues on the ground Wednesday was this: “If anything happens to us, please know we love you.”

They have spent weeks caring for the displaced, the injured, and the hungry. They are continuing to serve, continuing to carry your love to the people of eastern Ghouta.

What you might not know is that your love was on the ground long before Sunday’s attack.

Whether you’re new to Preemptive Love, whether you saw the heartbreaking images Sunday and gave to us for the very first time, or whether you’ve been part of this community for a while—we want to give you the clearest possible picture of what’s happening in Ghouta and how we’re responding. We have a clearer picture today than we did on Sunday, and we are able to communicate more clearly than we were in the initial fog of war and the scramble to respond.

The crisis in Ghouta

The conflict between government and opposition forces pushed Ghouta families to the brink of starvation. Many survived on just one meal a day. At the same time, families in nearby Damascus were frequently terrorized by mortars fired from inside Ghouta.

In February, government forces launched an offensive to recapture eastern Ghouta. The intense bombardment that followed left thousands dead and forced thousands more to hide in basements and tunnels. By the end of March, almost all of Ghouta was under government control, except for the city of Douma.

On Sunday, reports began pouring out of Douma that a chemical attack had killed dozens and injured up to 500. This is not the first chemical attack of the war—it’s not even the first this year. Hours after Sunday’s attack, the last remaining opposition forces in Ghouta agreed to leave the city, effectively giving Syria’s government full control over Ghouta for the first time in five years.

Opposition groups, along with the US and its allies, pointed the finger at Syria’s government and its Russian backers. Syrian and Russian officials have at times denied the attack or suggested it was a “false flag” planned by the opposition to draw the US into the fight.

Multiple UN resolutions calling for an independent investigation—including one backed by the US and another backed by Russia—failed at the Security Council this week. As of yet, no independent investigators have been able to access the site to determine the nature of the attack or who is responsible. But that has not kept the drums of war from beating louder every day.

To be clear: we cannot say with certainty what happened or who is responsible. But that doesn’t change our response. Many, many more lives were unmade by violence on Sunday. In addition to those directly injured or killed in the attack, thousands more have been forced to flee because of it.

Our response for Ghouta families

You were serving Ghouta families even before Sunday’s attack. We work alongside local friends and partners in Syria to respond—as well as having our own staff on the ground to plan, monitor, and document our efforts.

Here’s what that response has looked like, even before the attack:

Mobile medical clinics
Since March 12, you’ve supported a large mobile clinic serving at a shelter just outside Ghouta. Around 130,000 people had fled even before Sunday’s attack. More than 76,000 have come to the shelter where we are serving.

You’re also supporting four smaller mobile clinics—essentially ambulances that can provide urgent, primary care, not just transport patients. Right now, two of these clinics are operating inside eastern Ghouta, less than a mile from the site of the chemical attack.

You’re helping to staff these clinics with doctors, nurses, and drivers—and you’re supplying them with medicine. The medical teams are treating hundreds of patients every day. Some of them have conflict-related injuries. Some have chronic ailments. Most have gone years without access to proper medical care. 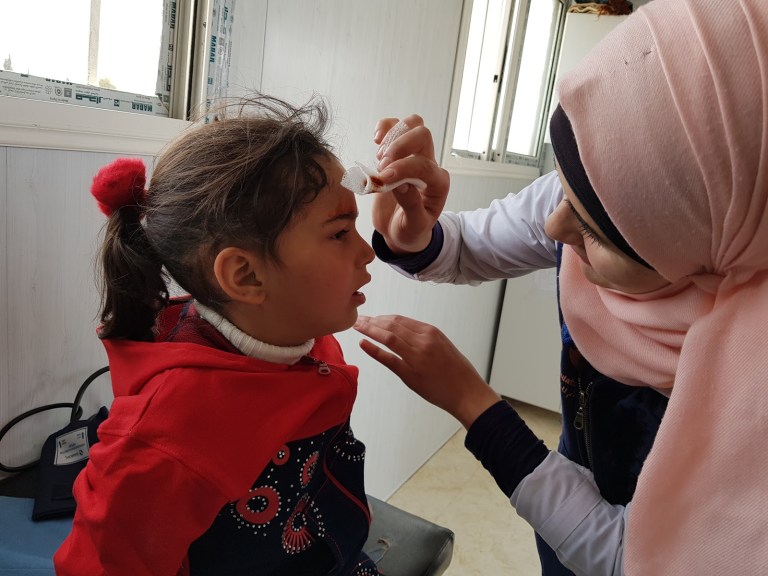 Emergency supplies
In addition to medical treatment, you’ve helped meet some of the most basic needs families have when fleeing war. Many Ghouta families did not choose to flee; they were forced to flee because of the fighting. They risked sniper and mortar fire from all sides to reach shelter. Most arrive with nothing.

You’ve provided clothing, diapers, nutrition bars, and hygiene kits containing women’s sanitary pads and other items to preserve their dignity and protect them from the spread of disease.

Emergency kitchen
A few days before the attack in Douma, you began supporting a large emergency kitchen, feeding thousands of displaced families per day. You’ve supported similar kitchens in other parts of Syria over the past two years, including Aleppo and Deir ez-Zor. These kitchens are staffed by locals, many of them displaced or vulnerable themselves.

The kitchen and clinics in eastern Ghouta are part of a coordinated effort between us, the UN, and other organizations on the ground. This allows us to amplify one another’s impact. If you’ve given in recent days or weeks—or if you’ve been a monthly sponsor—your donations have helped to staff the kitchen, provide cooking fuel, and put hot, cooked food on the plates for thousands of hungry families.

How the chemical attack affected our response

On one level, Sunday’s alleged attack was nothing new. It’s at least the third such attack in Syria in the first few months of 2018. A year ago, another chemical attack killed 100 people in yet another part of Syria. And of course, all sides in this seven-year war have proven you don’t need chemical weapons to cause a massive amount of death and devastation.

But the attack has major implications for Syrian families far beyond Ghouta. It could draw the US and its allies deeper into war, which would contribute further to the suffering of Syrian families without actually solving anything.

Inside Ghouta, the attack has made an already critical situation worse. Even before Sunday, the need in Ghouta far outstripped what we (or anyone else) have the resources to meet. Shelters are already overwhelmed. Clinics are overwhelmed. There is not enough of anything for those who had already fled.

Sunday’s attack triggered another wave of displacement on top of the existing crisis. Up to 150,000 more people are expected to flee as a direct result. The clinics near Douma have already begun to receive families who are fleeing in fear of more chemical attacks. So far, none have shown symptoms of exposure to chemical agents—but Sunday’s attack is what forced them to flee.

In the wake of the attack, we desperately need to increase our response to keep up with the growing need. So we can continue to treat injured and ill patients at the clinics, including those fleeing Douma right now. So we can continue feeding families on the run. And so—as and when circumstances allow—we can go into the affected areas and serve those who cannot or will not flee.

The situation in and around Douma is extremely volatile right now. We don’t know what tomorrow will bring. But what we do know is what kind of people we want to be.

We want to be the kind of people who love anyway, who show up to love and serve and lay down our lives and unmake violence together—regardless of who did what or what “side” someone is on. We want to be the people who are first in and last to leave.

The faces of war

This was the photo that sent shockwaves on Sunday, as news outlets around the world started finally paying attention to Syria again, however briefly. It’s the same photo we shared as we scrambled to respond to the horrifying news coming out of Syria.

It shows a child in Douma, reportedly one of the victims of the chemical attack, struggling to breathe. It breaks our hearts, as do so many of the other images that came out of Douma that day. We don’t know what happened to this child. We don’t know whether he survived. But we do know there are thousands more children who need us to show up. Thousands more who are on the run from Douma. Thousands who fear more chemical attacks, more violence, more devastation.

You are showing up for children in and around eastern Ghouta right now. These are just some of the children and families you have served in the last few days since the attack… 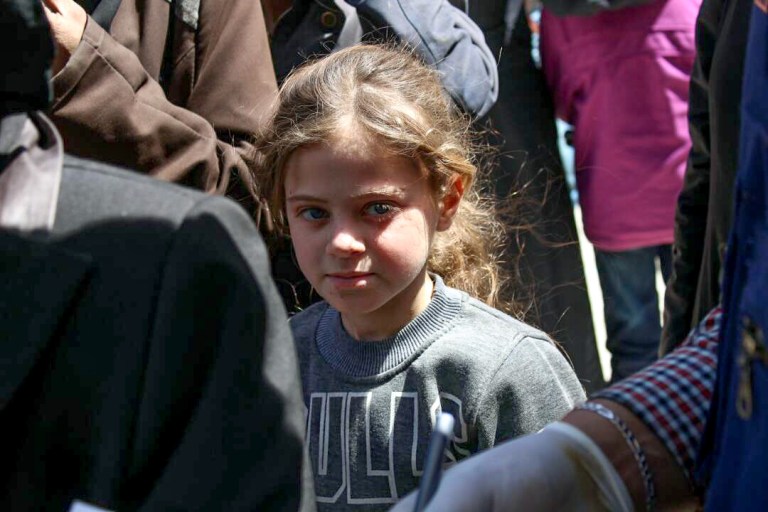 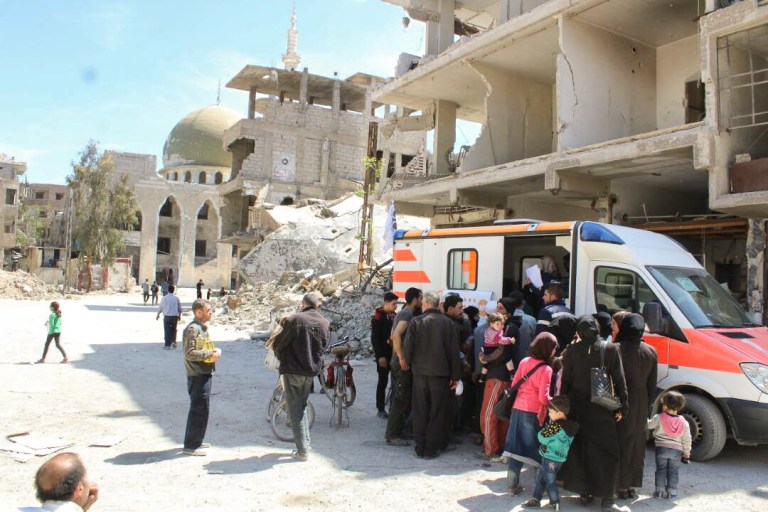 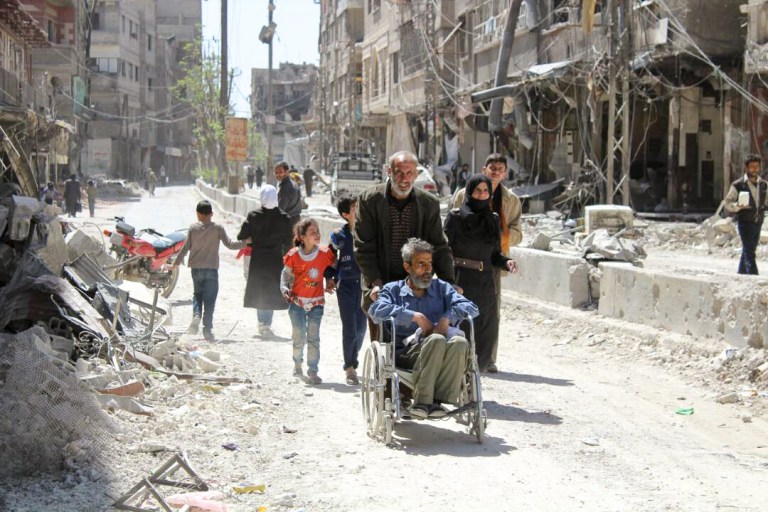 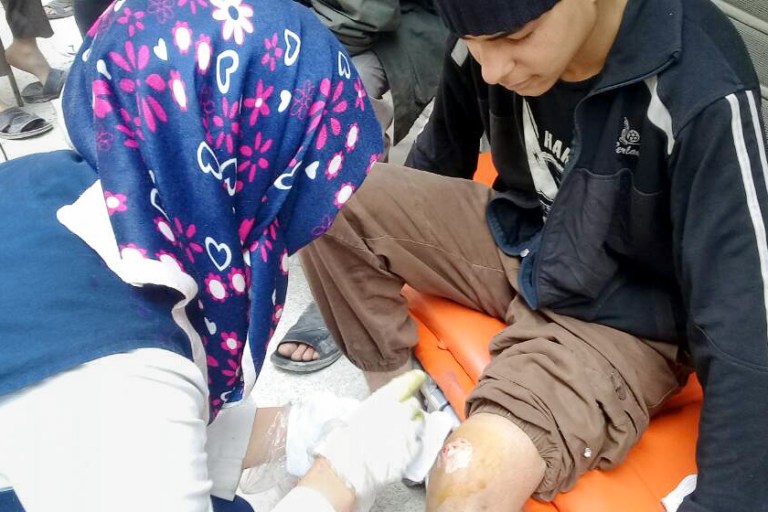 Keep following our blog for the latest updates from Syria.