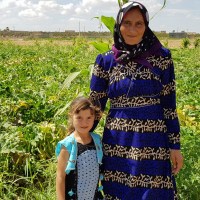 Giving Tuesday is tomorrow. This year, we’re beginning a yearlong effort to help 1,000 Syrian families in two of the most war-torn parts of Syria—Aleppo and Deir ez-Zor—return to their farms and provide for themselves again. To remake home.

We’re digging in to help Syrian families dig out from war, to provide for themselves again. We’re planting the seeds to unmake violence, to undo one of the root causes of Syria’s seven-year civil war. Join us.

When Rachida’s husband was killed in the war in Syria, she was lost. Sudden, life-altering changes can leave us not only bereft, but completely out of our depth—and it can feel impossible to move forward.

“When my husband was here, I used to be relaxed. I used to be a happy mother and wife. I did not have to worry about any of the providing,” Rachida told us.

Agriculture used to provide a living for nearly half of Syria’s population. It was a key driver for the economy, and provided the daily nutritional needs for families. That was all before the violence of war turned the country upside down, and drove farmers from their fields.

The UN has studied the situation inside Syria extensively, and in a report produced this spring, the crucial role of agriculture in supporting Syrians families was made clear:

“Before the Syria conflict, agriculture accounted for a quarter of the country’s Gross Domestic Product and was the main livelihood for almost half the population. Today, a third of the population inside Syria, or 6.5 million people, are facing acute hunger, and the conflict continues to drive the largest refugee crisis in the world.”

For as long as Rachida’s husband was alive, their traditional division of labor suited them well. But when her husband was killed, Rachida realized how little she knew about what it took to provide for a family.

“I did not have to worry about any of the providing, and I actually didn’t know what to do.”

Rachida was candid about her situation.

“I needed someone to guide me and take my hand, to help me figure out what to do and how exactly to do it.”

She isn’t the only one.

Our farming program is working to reestablish farms decimated by war.

You can help farmers return to their land.

You can empower Syrian families rebuilding their lives in the shadow of war by funding a rural agricultural development project, so that women like Rachida can support their families.

Through the establishment of farming cooperatives, we will help families return to pre-war planting. As much of the equipment and supplies as possible will be purchased inside Syria, investing in the local economy, and empowering even more local business owners.

Rachida’s husband used to grow zucchini. And now, with your help, Rachida can sow zucchini seeds in the earth, can plant life in the land with her own hands. She can provide a better future for her children.

This little farm can once again be full of life, can provide Rachida a way to care for herself and her children. This land can be tangible hope—after the death of her husband, and the death of the land itself.

With your help, Rachida, and others like her, will continue to dig out, dig in, and rise.