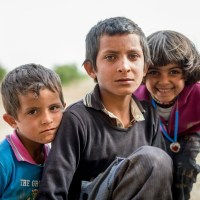 This time a month ago, the last opposition-held province in Syria was on the brink of being turned into a “lake of blood.” Soldiers warned anyone fleeing to Idlib that it would soon become a “crematory.”

As armies massed on the edge of Idlib last month, Turkish and Russian officials hastily negotiated a last-minute deal to form a buffer zone, putting space between Syrian government forces and opposition fighters.

Which left many asking: crisis averted? Or merely delayed?

Will the ceasefire hold?

The deal struck by Russia and Turkey established a 25-mile demilitarized zone separating  government- and opposition-controlled territory. The agreement was meant to prevent an all-out offensive—and the humanitarian catastrophe that would result in such a densely-populated part of Syria.

The deal hinges on the withdrawal of armed groups from the buffer zone, a move that was supposed to take place by Monday, October 15. Some groups appear to have withdrawn, along with most of their heavy weaponry.

But as the deadline came and went, the largest armed group in Idlib—the al Qaeda-linked HTS—swore to keep fighting. They didn’t leave. There have also been reports of mortar fire from within the buffer zone.

So now the world waits to see if this latest ceasefire holds… or not.

Even if it holds…

Hardly anyone believes the buffer zone is a real solution to the conflict in Syria. It does nothing to address the underlying conflict or the grievances on either side. In all likelihood, it is, at best a postponement of military confrontation.

Whether it is days or weeks or months—we will use that time to be ready.

Three million people are crammed into opposition-held Idlib. Half of them were bused in from other parts of Syria as they came back under government control. The area is so crowded that some have said every bullet fired will kill two people.

We’ve been preparing to respond to the Idlib crisis for weeks—mobilizing to deliver food and medical care to families on the run. We’ve served continuously in Syria since 2016, and we are not stopping now.

But we need you to go with us.

In order to be able to respond to the needs of Idlib families—whether the battle comes today or weeks from now—we need you now as much as ever.

Sign up to get the latest updates from Syria. You can also become a monthly donor today—your regular, monthly support will allow us to plan more effectively and say yes to what Syrian families need the moment they need it.

Idlib stands on a knife edge. Let’s be ready. Give today.