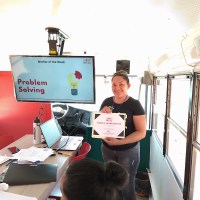 Jazmin used to live in Honduras, where she and her husband had a small business: he was a technician in cell repair, he did welding, and had a small motorcycle repair business; while she was dedicated to the sale of shoes, clothes, and other small items. This was the way her family tried to recuperate from losing their jobs during the pandemic.

This small family was dependent solely on each other: other family members, although physically close, had their own lives, therefore, leaving Jazmin and her husband a little isolated.

It was thanks to Covid-19 that Jazmin became like a teacher to her son. She had to remember things from a long time ago, and learn some new tricks she never learned in school: like improving picture quality, making homework collages, recording and editing small videos…basically a whole new profession.

Alas, in Honduras and El Salvador, no family is free from the mara, or gangs that use violence to assert absolute control. There is always someone connected to the mara nearby, looking for opportunities to gain something for the group. Jazmin’s small family business was an ideal place to sell drugs and be a potential lookout spot. If her family denied the request, “you know what will happen.”  Her husband flatly refused to cooperate and went ahead to file a report with the police, knowing the visits were just starting.

Eventually, the gangs decided to be clearer in their threats – they put a sign outside their business that said “Go away or we’ll burn you alive”. Jazmin had already lost family members after they crossed paths with the notorious M13 gang, and she didn’t want to see her little boy suffer the same fate.

Hence, they decided to leave as soon as possible, and when sunlight was barely peeking above the horizon, they abandoned their house and traveled to their destination—Mexico. When they were passing by Guatemala, so much extortion and ransoms were demanded, to the point they needed to ask for help once they arrived in Tapachula, Mexico.

Traveling through Mexico was no better, disease and constant harassment from authorities that clearly didn’t have much experience with asylum seekers, made the already hard experience become almost intolerable. After a while of waiting in a border city across from California, the family found out they could wait for their cases in Juarez, Mexico instead. They made the decision to travel once again and settle in a shelter for asylum seekers called Anapra House. Jazmin mentions she didn’t like the look of the shelter when she saw it for the first time – but now, she feels like she is among family.

Jazmin took the step to join classes at our mobile tech hub while she waited for news about her asylum case. During her first classes, Jazmin did not participate too much, mostly keeping to herself and talking only with the people from her part of the shelter. Clever as she is, I found her always looking for ways to solve the exercises by herself, not wanting to ask me, and resorting to asking for my help only when she ran out of options.

Her breakthrough came after one activity in our workshops: defining who is a migrant vs what people say about migrants. She allowed herself to be vulnerable and shared with the class how her journey was plagued with xenophobia, threats, and her family’s determination to hold onto their dignity; trying to remember that they were migrants, and NOT killers, thieves, scum, or any other derogatory remark they heard.

It was like a weight was lifted from her heart. During that session, each one shared the harsh words and distrustful looks they received, and continue to receive. It was heartbreaking and uplifting at the same time because, despite the challenging situations they faced, Jazmin and her classmates had not lost faith in humanity.

Jazmin started to participate more, laugh more, and engage with other classmates, encouraging them to find solutions to their homework without asking the teacher – after all, “as much as she loves us, she is not going to travel (to the US) with us”.

Her hard work paid off, and during her graduation speech spoken in carefully practiced English, Jazmin thanked her husband and son for their support, knowing that no matter what problem lay ahead for her family, they would always find an answer.