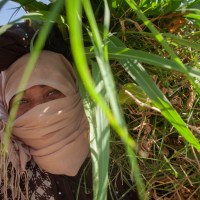 Aziza and Yasir move between raised beds and rows of plantings, eyes scanning the earth. They look for signs of heat stress or insect damage in the plants, and quick movements that could be a scorpion or snake.

They rise at first light to tend the garden beds—whether during their Ramadan fast or in the scorching heat of summer. If one type of plant fails to thrive, they quickly explore alternative methods. When water is scarce, they refine water-saving techniques.

You can’t help but notice the impact. While the surrounding landscape is beige and tinder-dry, the green of the garden draws lots of questions. Passersby stop to ask for advice, and Aziza and Yasser are always glad to help.

Between them, they have decades of gardening experience. Yasir spent his early years helping his family grow food back in Syria. “Every year we planted every kind of vegetable,” he says. “I also helped my grandfather—he had a lot of land. There was a well there on his land with plenty of water, and we didn’t use any chemicals.”

Yasir didn’t learn to plant food in an “organic” way. He just learned the traditional way. But now, the soil that Yasir and Aziza tend lies enclosed behind the guarded fence of a refugee camp in Iraq—home for many Syrians like themselves, all escaping war.

When violence broke out, they fled because their lives were directly threatened—bombs destroying their houses, soldiers and chemical weapons driving them away. Food and water grew scarce, and they desperately wanted to protect their sons from having to serve as soldiers in a war where “the enemy” is fellow Syrians.

What causes families to flee can make it impossible for them to return when the fighting stops. On top of that is the very real fear of retribution if you fled instead of fighting. So, many of those lingering for years in refugee camps have had to shift their thinking. Instead of the expected short displacement, just to keep their families safe, they may never be able to return.

This is home now.

Officially identified by the UN as a transition camp, this collection of tarp-topped tents in an Iraqi field now resembles a bonafide village: concrete-block homes, some paved roads, open drainage ditches to carry away heavy seasonal rains. Our Preemptive Love community has also helped start businesses throughout the camp, both home-based businesses and storefront shops.

No longer a temporary landing spot, this—this is where they live.

But it takes more than a UN designation to make a community like this home. It takes listening carefully as our friends talk about what they need to live well in this place. And, for them, it takes a garden.

After all, “agriculture for many people here is part of their story, a part of their history,” according to Kayla Hatcher, another part of the Preemptive Love community who serves as a permaculturalist. “It’s just such a part of their culture that you put in a garden in whatever space you have.”

In her role, Kayla identifies connections between communities and the land, and then unites the two. Today, she’s working alongside Aziza and Yasir to transform the land in a way that feeds residents as well as the earth.

But before residents ever turned over a single clod of dirt, ever built a raised bed or plucked a single strawberry, they spent time talking about their dreams.

Many of the Preemptive Love skilled craftswomen live in this camp—known as “makers” because they create candles, knits, and other goods to earn a living, bringing beauty to the world. We asked what kinds of farms and gardens they used to have in Syria, and what they would most like to plant in the unused area around our artisan hub—our “maker space.” And the stories started flowing.

When Marwa our friend spoke of her hometown of Aleppo, she got a faraway look in her eyes and smiled. She had left her city as civil war tore it apart at the seams. But what remained with her years later, after becoming a refugee and starting life over in Iraq, was the scent of the neighborhood she left behind. Jasmine.

“The women were so excited about the smells that are familiar,” Kayla says.

For refugees from rural Syria, farming remains their frame of reference, even if they don’t have access to land or livestock now. When you ask these women for their recipe to make yogurt, they start with: “Milk the cow.”

Those from Syria’s urban centers prize the flowers and vegetables that thrive in smaller settings. They are every bit as attuned to the passing of seasons as their rural neighbors, but with different cues: they mark time by the jasmine coming into flower, and that scent filling the streets.

As Kayla listened to the stories, she realized that this place, where so many had fled in fear when life as they knew it was ending, was actually ideal for growing something new: “a regenerative agriculture project that could have a 100-year impact if cared for correctly.”

Thus, together, they began planting a food forest: copying the systems of a traditional forest environment, but designing each layer for food production. Creating a space that would be beautiful, restful, and welcoming to the whole community. Nurturing plants to feed the neighborhood as well as the soil.

“War creates an unsettled space,” Kayla says, “and the heart of agriculture is really to create a settled space.”

In a food forest, you feed the soil to feed the community now as well as in future generations. “This design,” Kayla says, “is for the people, for the soil, for the insects, the snakes, the birds, and any species including the microorganisms that each hold an integral role in this system.”

The framework of the food forest takes in practical needs as well as the residents’ hopes. That means pathways, rest areas, a plant nursery, a place for tool storage, a produce-processing space, and a children’s garden.

Starting small allows the team responsible for this garden to continue listening to what the soil has to say. “You understand the insects and how they interact with the ecosystem,” Kayla explains. “You understand the water flow. You are taking the time to recognize natural patterns and rhythms that already exist, and working them to your benefit.”

“And with the land, they want it to be that same space.”

It doesn’t take much time inside any refugee camp to realize that organized, welcoming, and beautiful spaces for families to gather just do not exist, not outside of individual houses. No space to invest in together—to create connection and a sense of community and home. In this camp, this garden provides such a space.

“Your connection to the land gives you a place to call home,” Kayla says. “And that is a necessity in every culture, in every nation, on every land, with every people.”

Connection to the land isn’t only essential for adults, though we often first think of the farmers who work the land. Connection and a sense of ownership are essential for children too.

“The children show up at the garden,” Kayla says, “and they just want to do something. We don’t ever turn them down. We don’t ever say no. We find some way for them to interact with the task because, ultimately, this land will be theirs. Allowing them to see the beauty of investing in it now is an opportunity to change their perspective on what is home.”

Every refugee family wants to provide the best life they can for their children. They gave up everything they had, everything they knew, to bring their loved ones somewhere safe. Now these families are investing in this community to make it home. And they’re sharing their knowledge and experience with their Iraqi neighbors, to help them thrive too.

One of the most beautiful things about being a community of peacemakers is that you show up, and then you keep showing up. You’re not just first-in when a crisis hits. You’re also last-out, staying long after the rest of the world has moved on.