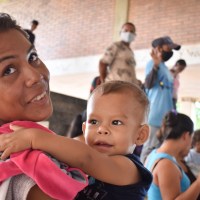 Francis works from sunup to sundown every day, sweeping the streets of her city clean. But because of the years-long economic crisis in Venezuela, and the constant devaluation of the local currency, it isn’t enough to feed her family. In fact, each month she earns less than half of the $5 she needs just to buy milk for her son.

In fact, the hunger crisis in northwest Venezuela has become so bad, we had to come up with a new way to measure it. Instead of counting how many meals a day kids here are missing, we have to count how many days they’ve gone without anything at all.

You can help close that gap.

In Venezuela, 3 out of every 4 families go hungry. Parents and grandparents have the agonizing daily task of trying to distract their little ones from hunger pains.

Many of these families are used to it—it’s been their pattern of life for years now. And for many, they’re now experiencing a fresh shame—having lost their jobs due to COVID-19, on top of the inability to feed their families.

The stability they once knew before their country crumbled around them is long gone.

One of the groups deeply affected by the disintegration of Venezuela’s economy are those middle-aged and older, like Francis’ parents. This generation of Venezuelans worked their whole lives and saved so they would be able to retire someday and help their families.

It was a great plan in theory. But no one could have predicted their savings would become worthless, and their children would need to become a lifeline of support for the whole family.

What if Your Savings Disappeared Overnight?

To make sense of the crisis in Venezuela, try a simple thought experiment.

Imagine it’s the end of a long week and you’re weary. You pick up your monthly pay after work, put it in your pocket, but you’re just too tired tonight to buy groceries, so you go straight home. If you are very careful, you can cover your expenses. You’re trying your best—but the cost of rent, food, and electricity keeps going up, even though your pay never does. You have a few bigger expenses, but you’re going to have to save up over a few months for that.

You go to bed exhausted, but at least you have a plan for the morning: pay the landlord, pay the electric bill, buy groceries.

When you wake up, you discover that the money in your pocket—your pay for a month of hard work—has dropped in value. Again. What would have covered rent, electricity, and a few weeks’ worth of groceries yesterday, now will only buy four eggs.

Not even enough to feed your kids a single meal.

It seems like the plot to a dystopian movie, but it’s not. This is what’s called hyperinflation, and it’s the reason why the situation for our friends in Venezuela is so precarious.

Revenues from oil exports once supported the generous social programs Venezuelans came to rely on. When oil prices collapsed starting in 2014, it had a dramatic effect on the country’s financial reserves. To make matters worse, the price of imported goods rose. And the government responded by printing more money. This started a cycle that continues to wreak havoc on the economy here.

More than five million Venezuelans have left the country in hopes of earning a living elsewhere. Venezuela is one of the only countries in the world not at war or in a cataclysmic drought that is heading into famine. Even as the population faces starvation, food production plummets—few have enough money to buy groceries.

The situation in Venezuela is well on its way to becoming the world’s biggest humanitarian crisis.

Which Has Brought Families to This…

Would you ever look through trash for something to eat?

Probably, if you were hungry enough. If your kids were starving, you’d do what some Venezuelan families are resorting to right now—picking through garbage on the street for something to feed their families. Choosing the least rotten bits, washing them, and somehow making a meal out of it.

The hunt for food has gotten dramatically more difficult in recent weeks, as heavy seasonal rains have brought flooding to the region. As the waters recede, the hungriest parents and children are picking through wet garbage, now contaminated with raw sewage and broken glass.

NO ONE should have to dig through trash for something to eat.

What Comes Next for Venezuela?

This is a loaded question.

The international community, including the United States, has imposed a series of sanctions, intending to force the current government to step down. These sanctions—economic punishments on Venezuela, as well as any country that trades with Venezuela—play a role in increasing the inflation rate. More importantly though, they have contributed directly to the suffering of millions of people.

Venezuela is a country slowly being starved into submission.

We know that Venezuela is more than its government, and is far from a monolith. Venezuela is made up of people—like Francis and 1-year old Arón, like Ana and José, like so many children and elderly who just don’t understand why they spend their days and nights so hungry.

We don’t always have the power to change what is happening at the highest levels of government, but we can change the daily reality for some of Venezuela’s most vulnerable families.

We’re showing up to their homes, and listening. We’re sitting with them in their sorrow, and their most acute needs. And then we’re returning with food.

“I feel that something special has arrived,” Ana said. “I feel that Christmas has come to my house. It is very beautiful that someone takes care of us.”

We’re delivering bags filled with everything a Venezuelan family needs to make meals for about a month—eggs, margarine, meat and chicken, oil, sugar, pasta and rice, powdered milk, coffee.

We take care to rearrange the menu to meet the needs of severely malnourished families. We include both the foods families like to eat, and foods specifically chosen to help malnourished kids recover safely.

These distributions are unlike any other we’ve done.

Because gasoline is so expensive, and nearly impossible to find, our team is delivering much of the food themselves, on foot. Carrying parcels on their backs and by hand carts during very narrow windows of time allowed between COVID curfews, and traveling in small groups to avoid drawing the attention of those who might steal.

That’s how committed they are to getting nourishing food into the hands of those who need it most.

A few days ago, one of these parcels made its way to Francis, her son Arón, and her aging parents—with enough food to nourish them for a month.

Food alone won’t solve people’s problems in Venezuela. But it’s a start. It’s a first step toward a world where no one digs through trash for something to eat. Where no one has to wonder how they will buy enough food to keep their family from starving.

We’re planning ways for these families to sustain themselves. Just as we’ve done in places like Iraq and Mexico, we’re listening closely, to find local solutions that will help families climb out of a situation none of them asked for.

We believe in the worth of our friends in Venezuela. And we’re standing with them. Every step of the way. Will you join us?