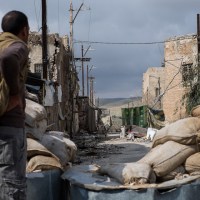 It happens in Iraq, in the U.S., and everywhere in between. It happens to people of every color, religion, ethnicity, and background.

We marginalize those we do not understand, those who are different from us, those who disagree with us or don’t conform to the dominant culture. This act of marginalizing and excluding someone can actually push them past the margins and into the extremes.

Because when someone feels cast aside or left behind, what they really need is to be brought back into community. They need to know that they belong—differences and all. They need to feel like there is a place for them.

But instead, we tend to shame people on the margins of society. We downplay their marginalization, tell them they’re imagining it, or blatantly insist there is no place for people like them in our community. We tell them they must become like us, agree with us, and play by our rules… or stay in the margins.

When we refuse to make space for the marginalized—regardless of why they feel that way—we force them even further into the margins.

The vast majority cope with remarkable grit. But eventually, some are pushed so far into the margins that they end up on the fringes. And that’s where extremism lurks, waiting to exploit their isolation.

It could be a young Muslim who is so marginalized by his western community that he finds solace in a radical group that validates their anger. (Research has shown that the most powerful motivation for joining a group like ISIS is not religion, but a desire for belonging.) But it can also be a poor white American who feels so marginalized by a changing society and decreased economic opportunity that they resort to violence and hatred.

However, when people start talking about the fact that they feel marginalized, we often refuse to acknowledge their experience. It’s not our experience, we can’t easily relate, so we dismiss it as invalid.

We dismiss their perspective. Sometimes we even mock them. We invalidate them as people—and when we do so, we push them further into the margins. Closer to extremism.

The only effective way to preemptively address the threat of extremism is to create a safe space for those who feel marginalized. Not by making them become like us. And not necessarily by agreeing with them or making space for their ideologies, either. Simply by treating them as human, instead of trivializing their perspective or dismissing them altogether. Simply by loving them.

The problem is that we tend to think of marginalization as something that other people are doing. But the truth is that we all marginalize someone. And therefore we all bear some responsibility for the radicalization of others, regardless of what side they are on.

As you’re reading this, you may be mentally applying this message to other people—to the ones you see marginalizing others or those you feel marginalized by. Stop thinking only of the failure of others. This applies to all of us. It applies to me. And it applies to you.

So stop marginalizing immigrants. That dehumanizes them.

Stop stereotyping Muslims. That dehumanizes them.

Stop dismissing progressives. That dehumanizes them.

Stop invalidating the experiences of black people. That dehumanizes them.

Take a minute and think about this: who are you marginalizing? Who are you trying to force to the edges of society until they disappear completely?

It’s happened over and over throughout history. It’s time we learn that embracing the people in the margins and choosing to love anyway is the only way to end extremism.

May we be those people today.