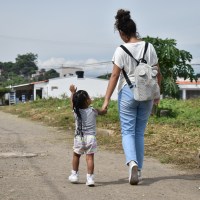 From Venezuela to Mexico, borders are defining points in the lives of many, especially those seeking to cross them in search of safety.

From above, you’d be hard pressed to see any border here at all. Just where the paved road turns to gravel, a forest obscures the creek that marks the border between Colombia and Venezuela.

Moms and kids, women traveling alone, men carrying heavy loads—all make their way across the creek and walk up a steep hill before disappearing on the other side.

In a different place, this might simply be a shortcut through the forest. Here at this trocha, an unofficial border crossing, it can be a shortcut between starving at home in Venezuela and finding food in Colombia.

The official crossing is a short drive away—four lanes wide and closed due to COVID-19. It’s the unofficial crossings, like this humid, shady place, where it becomes clear that borders are little more than the fluid expression of our current view of who is “us” and who is “them.”

A form of separation

All borders are porous to some degree. They can be less rigid (or nonexistent) for some—especially those with wealth, or those who look like us.

Borders are seen as immovable expressions of power. But in the long view, over hundreds or thousands of years, borders are incredibly fluid. Ideas of belonging and land ownership change over time. Values change.

Some places, like Europe, have experimented with open borders—neighboring countries decide they share enough common interests that crossings don’t need to be strictly controlled. In other places, like the United States, the differences between neighbors are seen as so great, that borders become ever harder to cross. The separation between “us” and “them” is strictly enforced.

The language we use

There is a common tale in many US families of an immigrant ancestor. Maybe they stowed away on a ship. Maybe they fled starvation during the potato famine in Ireland, religious persecution in England, or poverty in Italy—the details differ from one family to the next.

But the core narrative remains: they arrived in the US with nothing but the clothes on their back, a few dollars in their pocket, and maybe a few words of English. They worked hard, and provided a good future for their descendants.

The passage of time offers the kind of distance that makes these stories what they are: inspiring and, often, sanitized. In their day, these ancestors wouldn’t have been called “immigrants” by their neighbors. They would have been called aliens.

It’s a powerful word used by the US government since 1798. A word that provides the most thorough dehumanization: you are so unlike us, we may not even recognize you as fully human. You are completely other.

When Raul [name changed] fled his home in Honduras, he had a day’s notice—just long enough for his family to pack a few things and say some hasty goodbyes. Gang members showed up at his business the day before—and Honduran gangs don’t offer empty threats. Fleeing north wasn’t so much a choice to leave as it was a choice to live.

He and his family are currently staying in a shelter in northern Mexico. It’s the kind of place where it’s hard to find work, hard to start life over, hard to feel safe.

Should Raul and his family succeed in entering the US, they’ll become “aliens.” They will trade some of their humanity for the hope of safety.

When you can (and can’t) go back

The folks who cross borders from Venezuela to Colombia, or from Central America into Mexico and beyond—the vast majority would rather stay home. They would prefer to be safe from violence or starvation right where they grew up. But that’s becoming increasingly impossible for millions.

Adriana [name changed] is proud of the small denim factory she ran back home in Venezuela. Her keen work ethic helped her earn a good living. That was before the US imposed sanctions, before the economy collapsed and it became impossible to buy fabric.

Adriana had no choice but to close her business. The situation in her country has only become worse since.

For her, crossing the border wasn’t as big a deal as it is for others. She had the proper identification. Millions of Venezuelans lack the papers they need to cross legally. They have very real needs, like food and medicine. So they have to find a different way across.

Trochas are unofficial crossings controlled by local gangs. In some cases, it might be a muddy river. If you can afford it, you pay a little extra to ride a raft across. If not, you pay for the chance to wade through the river.

For some, using a trochas is part of their regular commute. They cross back and forth to find the food or medicine they need in Colombia, then home to Venezuela.

This border-hopping life can work when the primary issue is a lack of food or medicine. But not if you’re experiencing violence.

Millions flee because of gangs, domestic abuse, or, if they’re part of the LGBTQ+ community, threats from family or neighbors. Those who flee this kind of violence can’t return home. They travel as far as they need to be safe. For some, that takes them the entire length of continents.

We got to know Eduardo [name changed] at a shelter in Mexico, through a shared love of food. Pupusas, to be exact.

Shortly before they fled, Eduardo’s daughter was nearly kidnapped. Convinced there would be more attempts if they stayed, Eduardo and his family left behind the lives they knew. This is the story of millions of families. And like so many others, Eduardo is now living in uncertainty, unable to go home or move forward.

The price of living in limbo

When you flee home, every experience that made you leave is magnified until you find a place to land.

You are still vulnerable to violence. You have difficulty finding work. You’re treated poorly because you’re desperate for work, and have little recourse to fight abuse. Your life is controlled by the rules of so many others.

During COVID lockdowns, you are quarantined inside a shelter, unable to work. When laws regulating the admission of refugees and migrants change, every plan you had is turned on its head.

Then there is the emotional price of waiting near the border. In communities like Ciudad Juárez, Mexico, a stone’s throw from El Paso, the distance between where you are and where you long to be is agonizingly small. A narrow creek, a metal fence, some border patrol officers. You can see the place that offers safety. But unless you’re extraordinarily lucky, you will not step foot there.

Borders are defining points in the lives of those who cross in search of safety. Border fortifications tell some, “You are safe as long as we keep those people over there out,” and others, “You don’t belong here.” And for those who cross one border (or several), only to be stopped at another, their lives are defined by the in-between.

But these in-between spaces offer an invitation—to press in rather than turn away, to listen to the stories of those whose lives are shaped by a border, and choose to see them as anything but “alien.”

A version of this article will appear in the next issue of the Preemptive Love Journal.

Over the next few weeks, we’ll be sharing more about the urgent needs at these in-between spaces—the border between Venezuela and Colombia, the southern Mexico border, and the US-Mexico border. As a community of peacemakers, we are serving refugees and asylum seekers at all three locations—and we need you to join us.