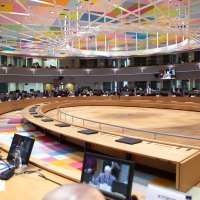 As the world held its collective breath, Russian President Vladimir Putin did the previously unthinkable and invaded Ukraine in February, 2022. In the dusk-light of pre-dawn on February 24, President Putin justified the invasion, claiming Russia “could not feel safe, develop, and exist” because Russia was under constant threat from Ukraine, with which it shares a 1,200+ mile land border. Ukraine is a vibrant democracy, with free speech and free media unlike its Russian neighbor, and has a president committed to stamping out political corruption. A major string tying Putin’s war narrative together is the supposed imminent danger to Russia posed by Ukraine’s desire to join the North Atlantic Treaty Organization (NATO). President Putin wants NATO to agree never to accept Ukraine into the alliance.

The North Atlantic Treaty Organization (NATO) is a formalized relationship between countries in North America and Europe created specifically to ensure mutual security.

Several events occurring between 1947 and 1948 led to NATO’s creation. There was a civil war in Greece between the Hellenic Army of the Greek government, supported by the UK and the US, and the Democratic Army of Greece, the military branch of the Greek Communist Party, covertly supported by the former Soviet Union (a confederation of communist states, dominated by Russia). Greece also had a contentious relationship with Turkey, which the Soviets were pressuring for control of the Dardanelles, a waterway which links the Black Sea (bordering communist states) to the Mediterranean Sea (bordering European and North African states). A Soviet-sponsored coup in Czechoslovakia resulted in a communist government taking power while Italy’s Communist Party also made gains. The final straw was the 1948 Soviet blockade of West Berlin, then under joint US, UK, and French control since the conclusion of WWII.  The US worried about the further spread of communism, and that Western Europe would negotiate future security concerns with the Soviets. To prevent this, the US government negotiated a European-American alliance that committed the US to enhance the security of Western Europe. In 1949, NATO was signed to enshrine the principle of collective defense—an attack against one is an attack against all.

In 1952, the first expansion to NATO membership happened with the inclusion of Greece and Turkey. West Germany joined NATO in 1955, and Spain joined in 1982.

At this time, Ukraine, which had been a part of the Russian empire for centuries, was part of the USSR as were Armenia, Azerbaijan, Belarus, Estonia, Georgia, Kazakhstan, Kyrgyzstan, Latvia, Lithuania, Moldova, Tajikistan, Turkmenistan, and Uzbekistan.

The Berlin Wall, a heavily guarded concrete barrier encircling West Berlin, a capitalist city inside a communist country, and separating it from East Berlin and all of Eastern Germany, was built to contain people as well as ideologies and culture. Prior to its formation, 3.5 million East Germans had evaded Eastern Bloc immigration restrictions and fled to West Berlin, from which they could travel throughout the economically more prosperous West Germany and Western Europe. The erection of the Berlin Wall allowed the Soviet Union to perpetuate the myth that life was better inside the Warsaw Pact countries, which were more economically depressed than their Western European counterparts, by cutting off access to Western Europe.

In November, 1989, a spokesman for East Berlin’s Communist Party announced that East German citizens were free to cross its borders. Over that weekend, over 2 million East Berliners crossed into West Berlin, ushering in the fall of the Berlin Wall. German reunification followed within a year.

US Secretary of State James Baker gave a verbal promise to President Gorbachev, then leader of the Soviet Union, that NATO would not expand to the east if Russia agreed to East and West Germany reuniting. The promise was part of an agreement on how NATO troops could operate in former East Germany. At that time, German Chancellor Helmut Kohl affirmed to President Gorbachev that “naturally NATO could not expand its territory to the current territory of the German Democratic Republic [East Germany]” because he was unsure if Germany would remain in NATO after reunification. However, President Gorbachev contradicted this recollection in a 2014 interview. He admitted that the topic of NATO expansion into other countries was not discussed when the stipulations for German reunification were being made.

If the promise that NATO would not expand east was made, it was not written into the Treaty on the Final Settlement with Respect to Germany, also called the Two Plus Four Agreement, which outlined the provisions for German reunification. Article V , paragraph 3 of the Two Plus Four Agreement states that “foreign armed forces and nuclear weapons or their carriers will not be stationed in that part of Germany or deployed there,” with that part of Germany referring to former Soviet-controlled East Germany. The Two Plus Four Agreement did not address future NATO expansion into other countries. At the time the agreement was signed in 1990, Central European and Eastern European countries were part of the Warsaw Pact and had formidable Soviet military forces stationed in them.

When the Warsaw Pact dissolved in 1991, former member states found themselves without a protective umbrella. In a 1993 letter from President Yeltsin, president of the Russian Federation, to US President Clinton concerning Poland, Hungary, and the Czech Republic’s interest in joining NATO and once again be part of a security alliance, President Yeltsin wrote, “The spirit of the treaty [the Two Plus Four Agreement] precludes the option of expanding the NATO zone into the East.” However, the NATO Russian Founding Act of 1997 states that each country has the sovereign right to seek its own alliances.

Many of these countries were originally part of the Soviet Union or were Eastern European satellite states. This expansion has also put most of Europe under the US’s nuclear umbrella, functioning as a deterrent to Soviet aggression.

The contradicting narratives concerning what was promised during the 1990 talks to reunify Germany resound today. It is one reason President Putin wants NATO to promise in writing never to admit Ukraine into its alliance. Whether President Putin sincerely believes the West tricked Russia in 1990 or if he is exploiting the inaccuracy of historical memory to justify an invasion is irrelevant. Relations between Russia and the West are frayed, and Ukraine is paying the price.