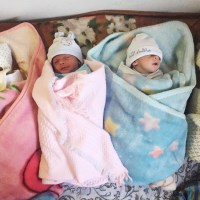 Children are a blessing. With eight children, Aiedah and Amar must be blessed many times over. Especially as the latest four additions came as a set!

They were born in the hospitainer—a hospital in a shipping container—that you provided so residents of this western Syrian community can be provided the medical care they so badly need. With four babies on the way, medical care was certainly something Aideah needed!

In the developed world, because of higher risks to both mother and children, women who give birth to multiple children do so via cesarean sections. But Aiedah delivered all of her babies naturally, supported by the doctors and nurses that had cared for her through her pregnancy.

Aiedah had visited the hospitainer shortly after it arrived in her city—she had been one of its first patients—so knew early on that she was having four babies, and was prepped by the hospitainer’s medical team on what to expect during the pregnancy.

Months-long sieges and fighting have devastated this town in western Syria, which means its residents have been cut off from many essential services, including medical care. Because of you, she had the benefit of healthcare throughout most of her pregnancy, and a safe, clean place to give birth, which would not have been available to her otherwise.

The reality of living with eight children under the age of 10 in a war zone though, is one that most of us can’t imagine. Aiedah and Amar live in a tiny flat in an abandoned apartment building. War took what they had, and more: Amar lost a leg when the fighting began in their town, and has been unable to work since. Their main meal of the day is porridge with pieces of pomegranate or almond in it. This is what everyone eats: the adults, the younger kids… and these four new babies.

Their town had seen a long siege and heavy fighting, and most of its residents have fled. But Aideah and Amar stayed, and are determined not to leave.

Aiedah and Amar are incredibly grateful for the care that you’ve made sure their family has received. Because of the doctors and nurses at the hospitainer you’ve brought to their town, they brought four beautiful babies home.

In fact, they were so grateful for their doctor’s kindness that they named the only girl of their quadruplets after her! Amar and Aiedah are Muslim, but they gave their daughter a Christian name: Marium. Dr. Marium built a bridge by caring for a patient of a different faith.

To the people of the Middle East, the meaning of names have great significance to those who bear them. Amar means “reconstruction,” and Aiedah is “one who returns.”

No better names can be given to those who are determined to rebuild their home, in a town torn apart by sectarian violence. When we asked why the family stayed here, in the midst of violence and destruction, Aiedah told us, “If I just have one wall, it is my home.”

Give today and provide ongoing medical care to Aiedah’s family and others at this clinic.