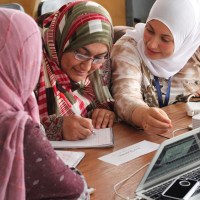 “Giving a voice to the voiceless.”

Have you heard this expression before? It’s a common way to talk about helping those in need, working for justice, imagining a better world.

But there’s an assumption behind this phrase we don’t often think about, but should. Namely, the idea that the people we serve— Iraqis, Syrians, refugees, the poor—are fundamentally powerless. Hopeless. Voiceless.

What refugees need most is not for us to serve them in their helplessness but for us to reject the idea that they are helpless.

So why does it matter? If the people who need help are getting it, isn’t this just semantics?

How we view people is extremely important. How we think about others, their agency, their strength and dignity—it’s paramount. The stories we tell ourselves, in our own heads, about ourselves, others, our work, how to help people, and on and on—it will define our work. How you understand things like fear, loss, poverty, trauma, love, friendship, and so much else is so, so important.

If we start with the assumption that refugees are helpless, devoid of power or any real potential, and that it is entirely dependent on you or me to help them, then we negate refugees and we contribute to the problem.

These people who’ve been stripped of so much are further lessened when we say, in effect, “You’re helpless. Let me help you.” We deny them the most important thing they need to be helped: belief in themselves, first and foremost.

What refugees need most is not for us to serve them in their helplessness but for us to reject the idea that they are helpless.

So to you, friend, to our team, and all who are a part of this Preemptive Love community, this is our commitment: we reject the idea that refugees, the poor, or anyone in this world is helpless—and that includes rejecting the idea that they have no voice.

So we hand them the mic, because they aren’t voiceless.

We ask them what they are going to do to rebuild their life, because they aren’t powerless.

We see them, story them, photograph them with dignity, because they aren’t invisible.

We check our egos at the door, we get out of the way, we choose a posture of mutuality, not believing ourselves to be better than those we seek to serve, because we aren’t.

If no one is truly voiceless, the question we must breathe to ourselves every day is this: are we willing to quiet our voices to really hear theirs?