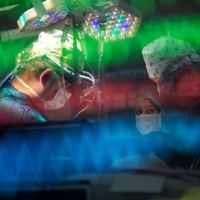 It’s cities like Baghdad, Fallujah and Nasiriyah that always bring to mind the hellish video clips and photos we’ve all seen flashed across our TV screens.

Car Bombs. Kidnappings. Militias. Chaos. It’s true, the South of Iraq has dangerous places. What we don’t see flashed across our TV screens are the images of a different kind of war. A war we were all made for. A war for peace, wholeness, and reconciliation between enemies.

Today, in Southern Iraq, a car bomb killed 48 people. At that same time, a few hours away, a little boy named Hussein Ahmed, an Arab from the South, was receiving a lifesaving heart surgery from American & Kurdish doctors in the North because of people all over the world who fought to make it a reality for him and so many others. Hussein was the first of four children from Nasiriyah whom the Vice President of Iraq himself requested we admit to surgery.

At 6′ 5″, Dr. Novick towers over almost everyone. Doctors in Iraq have to get creative to observe and participate in surgery and training.

As we sat and talked with Hussein, his family, and the director of the hospital in Nasariya who traveled up to witness the surgeries, we spoke of cooperation, peace, and our desire to invest in families like Hussein’s and the countless others in his city that have been affected by war. One of the first questions they asked of us is, “Will you come to Nasiriya?”

This past week Dr. Novick, our first Remedy Mission heart surgeon, was in Nasiriya and families were literally running to bring him their children with heart defects. If they’re running to others for help, then we should run to them to give it. It’s true, Nasiriya has often been a city that has seemed to be unraveling at the seams. Will we go there? Are they worth the risk? We believe they are.

This week you’ve helped us wage peace and saved the life of the first of many of Nasiriya’s children. You’ve shown them that even when car bombs and explosions escalate, so too can love. You’ve reminded them that there are still people out there that believe in them and believe there can be hope in Southern Iraq. You’ve shown Hussein that his heart is worth fighting for and now he’s continuing that fight in the ICU.

Help us tell the story of Hussein and the children from Nasiriya this week as we follow them to recovery!

Remedy Missions are international pediatric heart surgery teams that we bring to Iraq to to perform lifesaving heart surgeries and develop the infrastructure for the future. If you’re on Twitter this week be sure to use the #Remedy or #RemedyMission hashtag to describe all the good news coming out of Iraq this week via @preemptivelove and @babyheart_org. If you’re on Facebook, “Share” this story with the button below.