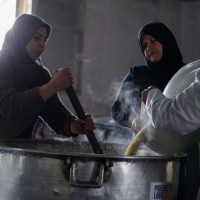 Syria’s civil war began in March of 2011. It’s been raging for over six years now. The refugee crisis it created is one of the largest humanitarian crises since World War II.

Roughly 11 million people—more than half of the country’s population—have been displaced from their homes. About 5 million of those are refugees living outside of Syria, while the other 6 million are displaced within their own country. Six million! That’s more than the population of Los Angeles.

Despite the overwhelming scope of the issue, you’re leaning in, rather than giving up. Since last year, you have been bringing relief and hope to families in Syria every single day.

Here are three ways your love showed up in Syria last month:

Ever since families poured out of Aleppo in December, fleeing violence and destruction, you’ve met them just outside the city with hot meals to sustain them on their darkest days. A lot of hot meals.

Last month alone you gave approximately 600,000 cooked meals. That means you’re feeding about 36,000 people a day, five days a week. Your love supplies the kitchens where the food is cooked in huge cauldrons. And you also provide jobs and salaries for over 100 staff members—most of whom are displaced themselves—who cook and distribute the food. Many of them would not have jobs otherwise.

And this is only one piece of our three-part nourishment program at this feeding center. We also give families two packets of fresh bread each week as well as a box of ready-to-eat food and hygiene supplies each month. The monthly box has things like canned chicken, tuna, beans, and cheese as well as toothpaste and soap.

You’ve been providing food for these families since November and will continue to do so until the need is no longer there.

2. Continuing to respond to families affected by the chemical attack

Over the last two months, you also brought relief to families affected by the chemical attack in northern Syria in early April.

We’re wrapping up a four-part response, which included:

Careful evaluation helped us respond to the specific needs of each neighborhood. In one spot, 224 kitchen sets and hygiene kits were distributed, but those families didn’t need food packs. In another area, we provided hygiene kits and food baskets to 600 households, but they didn’t need kitchen sets. These families had remained in their houses after the attack even though everything inside was coated with toxic chemicals. The cleaning supplies you provided helped make their homes safe again.

3. Creating a sustainable source of food

We’re also experimenting with new solutions in this ongoing conflict in Syria. One trial project that we’re really excited about is a hydroponics greenhouse that we’re working on. If it goes well, this could be a long-term food source for families and provide jobs for the growers.

Hydroponics is a way of growing plants in sand, gravel, or liquid, with added nutrients but without soil. This process means vegetables can be raised in a controlled environment with less chance of disease, faster growth, and greater fruit yield.

Last month our team started working with a hydroponics expert to grow tomatoes in a nutrient solution in PVC pipe. We know hydroponics can work, but we are curious to see if produce can be grown on a large enough scale to help families across the region.

We hope this idea will grow and expand into a meaningful source of food and jobs in Syria. Stay tuned for updates.

Thank you for staying engaged with families in Syria last month. Each meal, each hygiene kit, each new project shows the people of Syria that we will continue to stand with them in the midst of crisis.