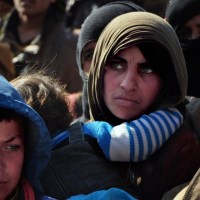 That was the day—three years ago today—that Mosul fell to an extremist group known as ISIS. Seemingly out of nowhere, 1,500 militants repelled a 60,000-strong Iraqi force and claimed the city and its 1.5 million inhabitants as their own.

Of course, it wasn’t that simple. ISIS hadn’t come out of nowhere. They were, in part, the latest incarnation of al-Qaeda in Iraq, an insurgent group that the U.S. claimed to have defeated years earlier. There were sleeper cells in Mosul long before the city fell, biding their time.

We were here when ISIS swept across the region. We watched in horror as Iraq’s second city fell. Mosul, just a few hours’ drive from our homes.

We had a choice: we could pull up stakes and leave Iraq, as many organizations did in those chaotic days. We could give up on this war-ravaged country. Or we could stay and press into the pain.

It was tempting to run. To get out. The fear was real. The danger was real. Those who left… they weren’t cowards. They weren’t overreacting. No one knew where or when or if this crisis would stop.

But you’ve spent years going with us into the hard places. You weren’t giving up on Iraq, and neither were we.

As fear closed in, we chose to stay—and to love anyway.

Mosul is where ISIS declared its so-called caliphate, an empire stretching across Syria and Iraq. Mosul is where ISIS marked the homes of Christians with the Arabic letter N for “Nazarene,” forcing families to leave, convert, pay a “protection” tax, or die.

Mosul is where ISIS bought and sold Yazidi girls as sex slaves.

Mosul is where ISIS imposed their strict morality code to its fullest extent. Men had to grow their beards long. Women could only leave the house if covered from head to toe. Violators were punished without mercy or restraint.

Mosul is where doctors were murdered for refusing to treat militants. Mosul is where ISIS sabotaged the water supply, leaving thousands of families without safe drinking water.

Life in Mosul was hell on earth.

In July 2016, fresh off their military victory in Fallujah, Iraqi forces turned their sights north, slowly making their way up the Mosul corridor, fighting ISIS every inch of the way. For their part, the militants turned their sights toward innocent families caught up in the conflict. They shot at those fleeing the Mosul corridor. They used civilians as human shields.

“They are destroying us,” one refugee said.

We began our emergency response that same month. At the time, there was no groundswell of public concern—Mosul barely registered in the news. But families here couldn’t wait for the rest of the world to start paying attention. They needed help, and there was no time to lose.

So we began providing water for displaced families. Shelter and bathrooms for those on the run. Wheelchairs for those unable to walk. We made sure families had training and hygiene supplies to protect themselves from disease.

As we pressed closer to the frontlines, the need grew more desperate. In Hammam al-Alil, 7.5 miles south of Mosul, our food distribution was overrun by hungry families who hadn’t eaten for days. Soldiers fired into the air and pointed their guns at civilians. There were more hard days to come—like when ISIS targeted our team just a mile outside the city, firing mortar after mortar as we delivered food to just-liberated families.

But there was hope, too.

We saw it in the face of a little girl who, after being driven from her home for her Christian faith, bravely announced her determination to go back.

We saw it in locals who celebrated when their town on the outskirts of Mosul was liberated. We saw it the tears of a father reunited with his family after two long years of separation by ISIS.

But the battle was just beginning.

As summer drew to a close, experts warned that a million people would flee once the fighting reached the city. The humanitarian community began preparing for a wave of refugees, by building camps far outside the conflict zone. But one question kept weighing on our minds:

What about those who don’t flee? Who will go to them?

We chose not to “stand ready” or “brace ourselves” for a surge of people to come to us. We decided we would go to them.

On October 17, the Iraqi government announced the battle for Mosul had begun. No one knew how long it would take. Iraqi soldiers wouldn’t reach the city itself for several more weeks. Eight months later, they’re still fighting to wrest the last few neighborhoods in west Mosul from ISIS control.

All this time, you kept showing up. You kept pressing in—unmaking violence every inch of the way.

A former ISIS bomb factory became a staging area for lifesaving food and water. As the new year dawned, your love crossed into Mosul on our first food distribution inside city limits. The families we met inspired us. People spontaneously formed a line to help hand out food. They made sure no one missed out, including vulnerable widows who couldn’t reach our trucks.

You opened the first medical clinics inside Mosul. Many of the children who came for vaccinations and medical care had never seen a doctor or nurse before.

You repaired hundreds of feet of water pipes in east Mosul, as part of a massive effort to turn the taps back on here. You were the first to reach families in western Mosul, where the most intense fighting has taken place.

And you keep showing up.

Unlike Fallujah, unlike Aleppo, Mosul has barely registered in the news. There’s been no viral #PrayForMosul campaign. The only reason we’re able to keep showing up is because you’ve gone with us. Because your love isn’t determined by what’s trending on Twitter.

As the military battle comes into its final stage, many organizations are pulling up stakes. Funding is drying up as Mosul becomes less and less “newsworthy.” We’ve heard from a number of local friends who were employed in the humanitarian response, now looking for work.

The real test of our resolve to make a difference is what we do after the rest of the world has moved on.

We’re not going anywhere. We’ll keep showing up in Mosul—providing medical care, repairing the city’s water supply, helping families rebuild. We’re on a mission to launch more than 100 new businesses in Mosul this year—day care centers, salons, beauty shops, bakeries, and more—to give families what they need to reclaim their lives from the ashes of war.

This is the real battle for Mosul.

This is the battle that will decide Mosul’s future—whether this great city can be made great again, or whether its people will be allowed to fall into the same cycle of violence and neglect that gave rise to ISIS in the first place.

This is the real test—not that we show up, but that we keep showing up.

It’s been three years since ISIS captured Mosul. Eight months since the battle for Mosul began. The wounds of war are not mended in a moment. But your love is loud and long.

The best way to ensure Mosul families have what they need to survive, rebuild, and flourish is by becoming a monthly sponsor. Your gift, whether it’s $5 or $50 a month, means that you’ll keep showing up with food, water, and medical care now—and with jobs, income, and hope for many, many tomorrows.

Be first in, last to leave for the families of Mosul.