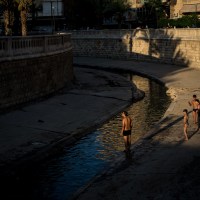 At first glance, it’d be easy to assume Syria is a dark, terrible place.

The “dumpster-fire of the Middle East,” one person called it.

Do a quick search about Syria, and you can see why—headlines about suicide bombs, mass evacuations, war planes shot down and all kinds of other tension.

Contrast that with a search about France that turns up stories about the Tour de France, the World Cup winners, and the French Riviera.

Syria is known for darkness, and understandably so.

There are constant reminders of this, including the news this week that Syria has begun releasing death notices for thousands of prisoners who’ve died in custody since the start of the war.

Yet, the more we’ve explored Syria, the more I’ve realized how much light and life is here.

The more we walk the streets of Old Damascus or along the canals of West Aleppo, it’s clear: this country is special. Not just was special, mind you. This place is still special.

One of our greatest joys as foreigners living and loving in Iraq is the chance to spotlight the beauty, hope, life, and everyday normalcy of Iraq. We love helping people understand Iraq and Iraqis in a deeper way.

But the more we’ve explored Syria, the more I realize how little I understand it in that “deeper way.” At least, not to the extent I thought I did. It’s humbling, having to step back into first grade after you thought you’d graduated, being reminded how little you actually understand about the world.

Yet again, as a foreigner living in the Middle East, I got a punch in the ego. Again, I got to see things that didn’t fit my ideas about a place. Little ideas like, Syria is destroyed. Syria is only loss, only pain, only dark nights. Dumpster-fire darkness swallowed Syria up a long time ago.

But oh, all the light.

Really, sometimes it’s downright blinding. That darkness and loss and pain—it’s all there, no doubt. But all the other stuff is there, too. And even the darkness wasn’t the darkness I’d expected.

Womb darkness is that dark place that’s about to push you into the light, into life and fresh air. Both are dark. Both feel scary. But one is a beginning, the start of something new.

In Syria, I’m sad to say I expected tomb darkness, but a lot of it really was womb, friends. It’s hard to explain but I’m so, so grateful to see it, to hear it from Syrians who’ve endured unbelievable pain, who’ve sacrificed. And these aren’t pie in the sky hippies. These are people on the bleeding edge of the world—they know what real love costs.

Standing next to this canal in Aleppo, I suspect our Syrian friends may have thought we’re a little bonkers. But something about standing on that bridge, watching kids dive into that inky canal, splashing and laughing, shivering in honey-colored light only to dive back in again.

So no, Syria isn’t just some dumpster fire. Yes, there is darkness in the story, but it isn’t over.