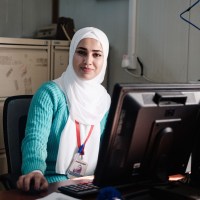 Is an education worth your life? Najwa thinks so.

When civil war engulfed her city in northern Syria, her siblings fled with their families, but Najwa chose to remain at home, so she could attend university and get her degree in French.

Global conversation about displaced people tends to focus on statistics. And numbers never reflect the human behind each count: how she struggles, what she hopes for, how she grows despite it all.

Najwa had a singular goal: to achieve a Ph.D. in French.

But war took that dream away from her.

Najwa did get her bachelor’s degree though. But with that tremendous milestone came another: she had to leave her home in Syria for safety. So she came to this camp in Iraq to join her brother and his family.

And that’s when she came across the tech hub you helped start, so that Najwa and other displaced Iraqis and Syrians can learn digital skills fundamental to finding jobs in the online marketplace.

The World Economic Forum estimates that there is a need to reskill more than a billion people for digital work in the next decade, as an equivalent number of jobs—almost a third of all jobs in the world—are likely to be transformed by technology.

For young Iraqis and Syrians, whose countries and economies have been torn apart by long years of war, reskilling is even more urgent. Enabling the next generation of entrepreneurs, workers, and leaders to rise in step with the rest of the world, is what will decide the future of their respective countries.

For Najwa, finding a job through her work is a daily series of steps towards realizing future dreams. Graduating from our tech hub equipped her well for working in the management office of the very camp she lives in. Using a variety of computer applications is a critical skill, and a basic command of the English language is another, both of which she learned from the IT course.

Najwa’s not giving up her dreams of getting that Ph.D. Having a job is going to get her there, step by step, every day.

For millions of Syrians and Iraqis, jobs are a way of reclaiming the future that was denied them by war. Jobs are hope and the realization of a better life than the one offered by destroyed economies and ongoing conflict.

Each job in the digital economy is one less gun pointing toward another war. That’s totally worth fighting for.

Help young people like Najwa fight for their future. Give today.