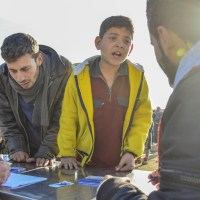 In his first address to Congress, President Trump addressed the debate over vetting refugees and the effort to stop terrorist attacks on U.S. soil. A new executive order is widely expected in the wake of his speech, but it’s still unclear when it will come or how different it will be from the original.

Here’s what we know after last night’s speech.

1. According to the president, executive action is needed to stop “uncontrolled entry from places where proper vetting cannot occur.”

Here are the president’s full remarks on the threat from would-be terrorists seeking to enter the United States:

According to data provided by the Department of Justice, the vast majority of individuals convicted of terrorism and terrorism-related offenses since 9/11 came here from outside of our country. We have seen the attacks at home, from Boston to San Bernardino to the Pentagon and, yes, even the World Trade Center. We have seen the attacks in France, in Belgium, in Germany, and all over the world.

It is not compassionate but reckless to allow uncontrolled entry from places where proper vetting cannot occur.

Those given the high honor of admission to the United States should support this country and love its people and its values. We cannot allow a beachhead of terrorism to form inside America, and we cannot allow our nation to become a sanctuary for extremists.

That is why my administration has been working on improved vetting procedures, and we will shortly take new steps to keep our nation safe, and to keep those out who will do us harm.

Opponents have questioned his claim that most terrorists come from outside the U.S.—see here and here, for example. A lot depends on what counts as a “terrorist act” or a “terror-related crime,” as these terms can be surprisingly squishy.

Critics of the president’s plan also point out that none of the attacks on U.S. soil mentioned in his speech were committed by people from any of the seven countries in his original order. The 9/11 hijackers came from Saudi Arabia, Egypt, the UAE, and Lebanon. The Boston Marathon bombers were born in Kyrgyzstan. The husband-and-wife pair in the San Bernardino attack were American-born and Pakistani-born, respectively.

In his speech, the president framed the alternative to his policy as “uncontrolled entry from places where proper vetting cannot occur,” observing that such a scenario is “not compassionate but reckless.” However, the U.S. has never allowed “uncontrolled entry” or been dependent on other countries to vet refugees. Vetting procedures currently in place for refugees are well documented.

RELATED: Four Things You Should Know About Refugees and Terrorism

We’ve said it before: opening our borders completely and locking the doors are not America’s only options. It is possible to care about refugees and care about securing our borders. Compassion is not “reckless,” but it nearly always entails some kind of risk—whether it’s showing up on the front lines with food for besieged families in Mosul, or opening ourselves to someone we don’t know.

There is a legitimate debate to be had over vetting methods and refugee policy—and we don’t claim to have all the answers to it.

But no one wins when we pit us versus them, our security versus their well-being.

2. The new order may be delayed (again).

The White House originally indicated it would sign a new executive order last week. Then it was postponed to this week, in part to allow government agencies more time to review it before implementation. Initially, an administration official indicated the new order would be signed today.

However, after the largely positive response to President Trump’s speech last night, administration officials said the new order would be delayed again, with one of them telling CNN, “We want the [executive order] to have its own moment.”

This marks a change for an administration that, two weeks ago, defended the rapid manner in which the original order was drafted and enforced. On February 17, President Trump argued that immediate action was vital, “because if you do it immediately, they [the terrorists] don’t have time to come in.” Any delay, he said, “would have wasted a lot of time, and maybe a lot of lives, because a lot of bad people would have come into our country.”

Now the administration appears willing to take a more measured approach to rolling out the new order.

3. The new order may target six rather than seven countries.

Immediately following the president’s speech last night, the AP reported that Iraq could be removed from the list of targetrd countries.

Iraq was originally one of seven Muslim-majority included in the order. Reportedly, both the Pentagon and State Department have urged the White House to remove Iraq from the list because of fears that a travel ban could undermine cooperation with Iraqis in the fight against ISIS.

Of course, nothing is definite until the new order is made public—which countries are targeted, what exemptions (if any) will be allowed for religious minorities, or what the fate of Syrian refugees will be.

Whatever the new order does, our response is still the same: we’ll keep showing up. In Iraq, in Syria. In war-torn places, in frontline places. In western Mosul, in Aleppo.

We want families displaced by war to be able to flourish, wherever they end up living. We have never waited for them to come us, and we’re not going to start.

We will go to them.

Because love during conflict means showing up to wage peace where others wage war. That’s true whether conflict is fought with guns and bombs or with words and votes, whether it’s fought “over there” in places like Syria and Iraq or “over here” where we live.