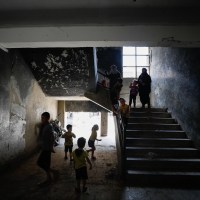 Field Update: More than twelve years have passed since the first beginnings of the civil war, and while the situation is much calmer today and more stable, this is the worst condition Syria has ever been in economically, politically, and socially.

The currency has been slowly rising since the Russia/Ukraine war after a period of relative stability, from $1 USD exchanged on the black market for 3,400 Syrian pounds (SYP) between September 2021 and February 2022 to 4000 SYP today. It has slowly reached the current level from a low under 3,000 SYP in May 2021, reflecting a persistent devaluation after an 8000%  decrease in value since the beginning of the war, when the US dollar was traded at only 50 SYP.

International sanctions against Syria are still in place, presenting hardships for both businesses and individuals. Imports remain limited to specific categories such as electronics and food with restrictions within these categories as well.  Imports are also limited to countries like Russia and China, which don’t recognize or participate in the sanctions ban. In addition to that, the Syrian government has given control of the commercial seaport at Tartus to Russia for ninety-nine years. Unfortunately, Syria has become only a small actor in its own affairs, with constant interference from the United States and Russia.

Given that we have a cash-based economy in Syria, the country had a very different experience with Covid-19 than many other countries—there have been minimal to no lockdowns/curfews, and no enforced rules and regulations. After the first alarming outbreak in April 2020, the country and its people resumed life as usual. Today 1.63M individuals are fully vaccinated which represents around 9.3% of the population, with most vaccinations given in the capital, Damascus.

The past winter, government buildings were shut down because of the cold at times —a lack of fuel for heating to keep employees warm showed how scarce fuel is across the country. While the weather was much nicer in spring, heat levels are rising with the summer season and the consistent shortage of fuel presents uncomfortable conditions.

In January, analysts were talking about an ISIS resurgence in the north-eastern part of Syria, with the attack on the Ghowarain prison which lead to an upswing of artillery fire and airstrikes by US and Kurdish forces. Fortunately, this seems to have backed down however, more recently, Turkish President Erdogan announced that he wants to expand the area of Turkish control north of Syria to about 30 km so they are starting to escalate airstrikes and offensives north of Aleppo and north of Hassaka which is most likely to lead to further large waves of displacement.