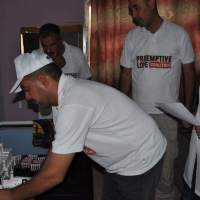 Yesterday, ISIS launched a mortar attack on a refugee camp in Iraq, killing 13 people and injuring dozens more. As the nearest hospital ran out of emergency medical supplies, doctors appealed to Preemptive Love for help—and you answered.

Because of you, we were able to rush medical kits to the scene—not days after the fact, but within hours of the attack.

Our Preemptive Love team, already on the ground serving families in the camp, sprang into action, purchasing vital medicines and supplies and delivering them to the hospital immediately.

The families who were targeted in this attack already endured so much at the hands of ISIS. Many of them fled to this camp from the area around Mosul—Iraq’s second largest city and also the biggest ISIS stronghold left in Iraq.

Your generosity has already provided more than 100,000 pounds of food for these families. And now, because of you, those injured in this cowardly attack are getting the care they desperately need.

We’ll continue to update you on our response to this attack. The crisis in and around Mosul is only beginning. Up to a million people may still be trapped in the city—ten times the number trapped Fallujah before it was liberated this summer. They need to know they are not forgotten. And this week, you are sending a resounding message.

When you give, refugees get the care they need. It’s that simple.

Thank you for saving lives with us. To support our ongoing efforts to help refugees fleeing ISIS-held Mosul, click here.