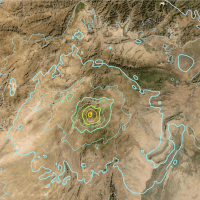 More than 1,000 in Afghanistan have been confirmed dead and over 1600 injured in what could be one of the deadliest earthquakes in two decades, at 5.9 in magnitude. The number of casualties is expected to rise, and many are still trapped under the rubble of generations-old homes destroyed in the quake.

It struck in the eastern provinces of Paktika and Khōst, near the border with Pakistan, around 2:30 am, when most residents were home, asleep, and unable to quickly flee to open areas.

The devastation is widespread, with more than 850 homes completely destroyed, and countless others damaged. This earthquake could affect upwards of a million people.

A team member in Kabul, in a 6th floor flat, felt the 30+ second earthquake strongly.

The last two months have been difficult for many in Afghanistan, apart from political and economic issues. In May, “500 houses were destroyed, 2,000 damaged, 300 head of livestock killed and some 3,000 acres of crops damaged” in flooding. Two days ago meteorologists predicted floods for 22 provinces, and rare summer snow in central Afghanistan will only make flooding worse.

And in Kabul, an attack on a Sikh temple claimed by the Islamic State four days ago shook the city. Gunfire and explosions were widely felt, and the sound of sirens went on well into the afternoon.

As one of our team in Afghanistan expressed so well, ‘even though we’re used to it, the explosions are so difficult on the psyche.’

The previous government, with access to western aid, struggled to handle large-scale disasters. The current Taliban rulers simply don’t have the infrastructure in place to handle it. The Taliban has reached out to Moscow for assistance, but with the war in Ukraine occupying the Russian government, it remains to be seen what the response will be.

We’re here. As our team is reaching out to family and friends at the earthquake’s epicenter, we’re also putting together emergency aid resources for the affected area. Updates to follow.