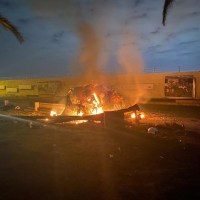 At 1am Friday morning, US forces launched a targeted drone strike at the Baghdad airport, killing Iranian Major General Qasem Soleimani, leader of the Quds Force of the Islamic Revolutionary Guards Corps; Iraqi militia commander Abu Mahdi al-Muhandis; and a number of others.

The drone strike was ordered by US President Donald Trump and confirmed by the US government. The deaths of Qasem Soleimani and Abu Mahdi al-Muhandis were confirmed by Iranian government and Iraqi militia officials.

This is potentially the most destabilizing thing to happen to Iraq since the rise of ISIS—and perhaps even more so. No one knows what will happen next—or whether these actions will trigger a wider war. But the seriousness of this moment cannot be overstated.

Who were Qasem Soleimani and Abu Mahdi al-Muhandis?

Simply put, they were two of the most important military figures in the region.

Maj. Gen. Qasem Soleimani was not only the military leader for Iran; he led militias and military action across other parts of the Middle East, including Iraq. Qasem Soleimani backed and supported government-sponsored PMU militias in Iraq—led by Abu Mahdi al-Muhandis—in the territorial defeat of ISIS in Iraq. Soleimani also backed militias fighting in Syria to keep President Bashar al-Assad in power.

With their deaths, their supporters are calling them martyrs, underlining the idea that they lost their lives in service to their people.

What is the regional reaction?

The reaction the morning after the attack was mixed.

Supporters of Qasem Soleimani are mourning his death. Muqtadr al-Sadr, a highly influential Baghdad-based cleric with strong ties to Iran, pledged his militia’s support to protect Iraqi sovereignty. Many in the PMU militias are vowing revenge. And leadership inside Iran are promising retaliation.

Qasem Soleimani had his detractors here in Iraq, too—and those opposed to him are relieved by his death. While he had a key role in the fight against ISIS, he was also responsible for much violence throughout his military career.

A growing number of Iraqis, including thousands of young people who have been protesting corruption and a lack of opportunity since October, have been calling for the removal of foreign influence in Iraq, specifically that of Iran, which has had a growing influence over Iraqi politics and internal affairs since the US overthrew Saddam Hussein in 2003.

Reaction to the US strike is universal: shock. No one saw this coming. These were such influential men, and it was frankly unthinkable that they would be targeted for assassination.

Many in the region have been calling for the removal of US presence in Iraq since the defeat of ISIS. US forces maintain they are needed as a stabilizing force, and to further train and protect Iraqi forces. And for some, like the Kurdish community in Iraq’s north, that is widely believed to be true. But for Iraqis in the south, particularly Shia communities, ongoing American presence is seen as divisive and responsible for regional instability— an unwanted occupation that has carried over from the 2003 invasion.

There is also widespread anger that the United States continues to enact violence against Iran inside Iraq, endangering the lives of Iraqi families, a fear that was confirmed as 2019 came to a close.

What led up to this:

In recent months, a series of small-scale rocket attacks were launched at Iraqi bases housing US forces. No one claimed responsibility for these attacks, and there were no injuries until an attack launched at the K-1 base in Kirkuk on December 27. One US civilian contractor and two Iraq police officers were killed, and several others were injured.

Two days later, the US retaliated with five airstrikes against bases belonging to an Iranian-backed militia in Iraq’s far western desert. Upwards of 25 militia fighters were killed, and more than 50 injured.

On New Year’s Eve, hundreds of Iraqis belonging to Iranian-backed militias poured into the area around the U.S. Embassy in Baghdad. They stormed the gates, burned sections of the embassy’s protective outer walls, threw rocks, and demanded that the remaining US military and diplomatic personnel leave.

On New Year’s Day, militia leadership ordered their fighters to retreat from the embassy, and by the next day, the militia presence was gone. The US government vowed a swift response, making clear that US personnel would be protected.

Then in the early hours of Friday morning, one week after the attack in Kirkuk, two of the most influential military leaders in the Middle East—one Iranian and one Iraqi—were killed.

Be the first to know.

Get alerts to podcasts, videos, & more as things develop here on the ground.

What will happen next?

No one knows. Truly. The internet and airwaves are filled with speculation and hot takes. But here is what we do know:

It is too early to say what will happen next—whether these events will trigger a wider war, whether they will erode or further cement Iran’s influence in Iraq. But today, the situation in Iraq is as precarious as it’s been since the rise of ISIS. But we must be ready for multiple outcomes.