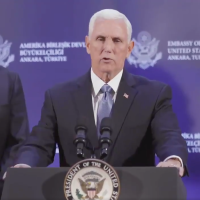 The US just dramatically reversed its policy on Turkey’s offensive in Syria, with the agreement announced today by Vice President Mike Pence.

The agreement pauses Turkish military operations for now. And while any pause in violence is a good thing for however long it lasts, the agreement will only deepen the humanitarian crisis, despite all the posturing that it will save lives.

This is a rapidly developing situation, but here is what we know about the deal so far:

If early reports are accurate, this is a big win for Turkey. Its foreign minister said as much after the announcement: “We got what we wanted. This is not a ceasefire.”

The Kurdish population in northeastern Syria will lose a stretch of territory 280 miles long and 20 miles deep. Civilians will be left vulnerable to further attacks—whether from Turkey or the Syrian government.

Give Now to HELP FLEEING FAMILIES in Syria

This deal will make it easier for the Syrian government to reassert its control over Kurdish territory, something that was already starting to happen this week, as Syrian and Russian forces began moving into territory formerly patrolled by US forces.

This deal is a significant loss for the Kurds, who already felt betrayed by last week’s withdrawal of US forces.

Most of all, this deal means anything but an end to the current humanitarian crisis.

It is likely that families will continue to be displaced from the border zone as Turkish forces move in. Those already displaced may have no home left to go back to, as a direct result of this deal.

It is also a potential disaster for the 2-3 million Syrian refugees that Turkey plans to forcibly resettle inside the “safe zone” they just carved out of Kurdish territory. These refugees, for the most part, are not from this part of Syria. They’re about to be displaced all over again.

Whether the fighting really stops, this crisis will not. Displacement isn’t a one-time issue. These families will stay displaced for years.

For the tens of thousands of families on the run, today’s announcement appears to be anything but a victory. We are standing with them. We are continuing to serve them right now, with urgent food and medical care. And they need you to stand with them too.