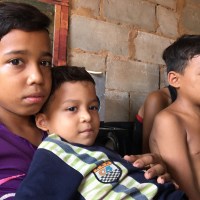 Yasmely had to step out of her house to take a breath. She hadn’t eaten in more than three days and couldn’t bear the sound of her children crying from hunger.

“I had to go out on the street,” Yasmely said. “I couldn’t stand the cry of my children asking for food.

“I ran out to look for help from the neighbors. I went out to look for food in garbage bins behind the markets. There I get rotting cheese that I wash with soap. Sometimes I find flour with small insects that I can carefully pick out. One would do anything for their children,” says Yasmely, in tears.

Yasmely is a 38-year-old mom. She lives with her husband, 7 children, and a granddaughter. Finding food to feed everyone is a constant battle.

“There is no way to stop the crying of a child who cries from hunger, “ she says. “Nine people who look at me sad, because they don’t know what they will eat.”

Yasmely talks about her suffering plainly. “it’s the most heartbreaking situation that I’ve ever had to live through”

Her country, Venezuela, was once a place of wealth—the kind of wealth that comes from huge oil reserves. But years of political unrest, which brought economic turmoil, has left the country devastated.

Venezuela has been in economic freefall for more than 6 years. Your odds of being killed, kidnapped, or robbed by gangs is high. The US State Department considers Venezuela “one of the deadliest and most violent countries in the world.”

What have decades of violence and economic depression done to Venezuelan families? It’s been devastating.

Studies done in the last two years show that upwards of 16% of Venezuela’s kids suffer from acute malnutrition. In some neighborhoods, the risk of starvation is so immediate, houses are flagged to show where residents are the most desperate.

Yasmely’s 14-year-old son helps his family as much as he can. “When I see my mom cry, I start crying too. And to bring back Mommy’s smile, I immediately go to the city center to sweep some businesses. People give me food, and the little they give me, I take home” he says.

After a day of cleaning, the teenager is greeted with shouts of joy and hugs from his brothers. They welcome him as if he were a hero who managed to bring bread and butter to the table. He is their hero—a hero without a cape, without the need for super powers.

He keeps his family from starving, but the food he’s able to earn is never enough.

Sometimes, violence takes the shape of war. There are sides, uniforms, and we can easily identify who are the “good guys” and who are the “bad guys”.

Other times, violence takes the shape of a thousand small wars, like it has in the streets of Venezuela, where the dangers are best known only to locals, who risk their lives constantly—just to try to find a few meals a week for their families.

We are committed to ending war, to loving in places torn apart by violence.

In Libya and Iran, it’s looked like medical care. In Iraq and Syria, it’s meant food, medicine, and jobs. In Colombia, we’re providing medical care and food to Venezuelan refugees.

And in Venezuela itself, we are now working with local community leaders to bring essential food to families who regularly go days without anything to eat— so that 14-year-old heroes don’t have to stand alone.

Give to feed hungry families in Venezuela.