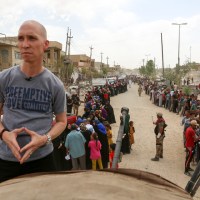 Iraq’s prime minister has visited the city of Mosul and declared victory after more than three years of ISIS rule here.

Military victory in Mosul is a major accomplishment, after nine months of grueling warfare that has left thousands dead and much of the city in ruins. ISIS has finally lost its grip on Mosul, but now is not the time to look away. Here’s why.

1. The fighting is not over.

ISIS fighters were confined to a few small areas of the city as of yesterday—perhaps 100 to 150 square meters, in what used to be one of the more densely populated areas of Mosul. It’s mostly foreign fighters who are left now—those not able to blend in with fleeing families in order to escape.

More importantly, loss of terrain does not equal the defeat of terror. ISIS’s presence is diminished in Mosul, and they may not control any actual land now, but that doesn’t mean they’re no longer a threat.

The day before Iraq’s prime minister arrived to declare victory, ISIS launched a major counterattack, reclaiming hundreds of meters of territory. They’ve planted suicide bombers among those fleeing areas of conflict—including a woman who detonated herself over the weekend while holding her baby. Yesterday, ISIS fighters were still battling Iraqi forces near the Tigris River, while using their own families as human shields.

Even after ISIS loses its last square meter of territory in Mosul, they will continue to be a lethal threat to this city and its people.

2. The so-called caliphate is down, but not out.

New York Times journalist Rukmini Callimachi argues that the fall of Mosul does not mean the collapse of the caliphate. “We’re very far from that,” she said on The Daily podcast today, noting that ISIS still controls three significant areas of Iraq: Hawija, Tal Afar, and much of Anbar province. Before ISIS came on the scene, Tal Afar had a population of around 200,000, similar in size to Raqqa, ISIS’s de facto capital in neighboring Syria. As of today, at least 150,000 people still live under ISIS rule in Iraq.

We are positioned to respond on the frontlines in all of these places—and we’re already providing food, medical care, and other help in the Tal Afar region.

Thousands fled for their lives during the battle for Mosul. The UN predicts it will be a long time before most of them are able to return, because the damage to the city is extensive.

Many neighborhoods here in Mosul are in ruins. The tens of thousands—perhaps hundreds of thousands—who stayed behind are having to cope without basic services—no electricity, no clean water. And many of them are viewed with suspicion for having stayed. On more than one occasion in recent days, we’ve heard Iraqi soldiers claim that everyone who stayed in Mosul’s Old City belongs to ISIS—a claim that doesn’t hold up to scrutiny.

It will take years for families here to rebuild their lives. But here’s the reality: many aid organizations are already pulling up stakes or scaling back their work in and around Mosul. They’re betting that you will stop caring once Mosul is no longer “newsworthy.” They’re betting that you don’t have the attention span or the will to keep showing up after the cameras have all moved on.

We’re making a different bet—and it’s risky, but we think it’s the right one.

You’ve given—and continue to give—people what they need to hold on and hold out while the battle rages. The day before Iraq’s prime minister declared victory—the day that ISIS launched a major counterattack—your love was showing up in one of the “no go” neighborhoods of Mosul, a neighborhood that some have written off as unworthy of help. But you haven’t. You keep showing up. You keep pressing in.

Now let’s make sure these families have what they need to rebuild, to replace mountains of rubble with a thriving, flourishing city:

When the rest of the world turns away, we can be the people who dig in, who say, “We’re with you. For as long as it takes.”

Partner with families in Mosul as they rebuild—become a monthly sponsor.