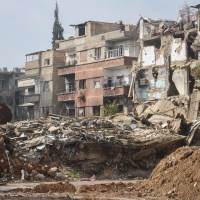 A wedding in Maine. A market in Beijing. A meatpacking plant in Germany.

All inflection points in a global pandemic that turned our whole reality upside down in 2020. Everything we took for granted about everyday life. Rituals both sacred and ordinary. How we gather with our loved ones. How we shop. How we mourn the dead.

We’ve learned more about the spread of disease this year than we ever wanted to know. The language of a pandemic has become part of our everyday lexicon. Clusters. Contact tracing. Community spread.

This crisis will pass. As for the lessons we’ve learned from it—we just might be able to use them to stop an even bigger pandemic:

The pandemic of violence.

Most of us aren’t accustomed to thinking of violence as a disease. After all, it’s a behavior. A choice. Something innate to the human condition. Those who commit acts of violence are to be locked away—without hope, beyond redemption.

Except, this way of thinking only reinforces the cycle of violence. It’s only by treating violence like a disease that we can begin to cure it.

This is the approach behind everything we do—every bag food, every new refugee-owned business, every relationship healed.

Violence is a disease—and there’s a cure. Understanding this can unlock a whole new future.

After 10 years fighting epidemics in Somalia and Uganda, Dr. Gary Slutkin returned to Chicago exhausted, physically and emotionally. He had no idea what to do next, until a friend told him about a spate of gun violence that was killing many of Chicago’s children.

Chicago had them, too. Wave after wave of violence, concentrated in certain places.

But why? Is it because some people are inherently more prone to violence than others? No. It’s because the biggest predictor of violence is exposure to violence. Or as one BBC article put it: “One of the primary indicators that someone will carry out an act of violence is first being the victim of one.”

Violence begets violence. In other words, it spreads like a disease. But the parallels between violence and a virus don’t stop here.

Just as viruses can affect organs, tissues, and immune systems, violence affects your brain, in some cases rewiring it altogether.

Survivors of violence often display a heightened response to threats, perceived or real. Many people are compelled to commit acts of violence in order to win the acceptance of their peers—whether it’s the local street gang or the ISIS militants who just rolled into town—in part because the brain experiences alienation or social rejection the same way it experiences physical pain.

Violence alters your brain in ways you can’t control. But brains can be re-rewired, and violence can be unmade.

Epidemiologists have a threefold playbook for disrupting a pandemic: stop the spread, reduce the risk, and change the norms.

You start by identifying clusters, outbreaks—and rushing help to these frontline hotspots Stopping the spread.

But you also have to identify those who are more vulnerable to infection and do everything you can to protect them before they get sick—wearing masks, social distancing, helping the elderly and immunocompromised. Reducing the risk.

To fully eradicate a disease, though, you have to confront the underlying behaviors that allowed it to spread in the first place. Changing the norms.

Ultimately, you don’t win by treating symptoms or even by repelling the virus. To eradicate disease, we have to change.

So how do we end the pandemic of violence—and possibly end war itself? The same way.

The work we do around the world—in Syria, Iraq, Mexico, Venezuela, the US—it’s about more than handing out food or helping refugees climb out of poverty. We exist to disrupt the cycle of violence.

We exist to end war.

It’s not pie in the sky. It’s not putting flowers into gun barrels. By applying the same time-tested, proven principles for stopping any other disease, we can stop the disease of violence.

Maybe not everywhere. Maybe not all at once. Maybe it’s a lifelong pursuit rather than a once-and-done endeavor. But it can be done. Violence is not inevitable. It’s a disease, and there is a cure.

This is our threefold playbook…

Relief to stop the spread of violence

We go to the epicenters of violence with food, shelter, and medicine—often while the bombs are still falling and the bullets still flying—because it’s the only way to stop the spread of war.

If families are left to fend for themselves, feeling forsaken by the rest of the world, then the story of the next war is already being written. Exposure to violence is the biggest predictor of violence.

We help fast to mitigate the worst effects so we can disrupt its retaliatory cycle. In other words, we help mend the wounds of war before it’s too late.

Jobs to reduce the risk of violence

Nothing reduces the risk of violence like a job. An Oxford University study found that higher income dramatically decreases the length and likelihood of war.

Women who own their own businesses invest in their families’ future instead of bracing for the next disaster. Young men with jobs that offer dignity and income have less incentive to pick up a gun for a militia or a terror group. Whole communities have less to gain—and more to lose—by going to war when they are able to flourish.

Community to change the ideas that lead to war

Perhaps the greatest lesson of COVID-19 is that it can affect any of us. The same is true for violence. War is not an “over there” problem.

Like any disease creeping through our bloodstream, violence is present in our heads and our hearts, long before it ever reaches our hands. We have to re-rewire our brains so we can learn to live with—and for—each other.

Fear and prejudice lead to violence. But when we sit down with our enemy, real or imagined, another possibility emerges. We can start to heal what is tearing us apart. We can see that we belong to each other. We can stop the next war before it starts.

It’s not a pipe dream. It’s a model that works. We’ve been proving it for over a decade. From Iraq to Mexico, Venezuela to the US, we’ve seen how changed ideas lead to changed ways of living—new relationships across what used to be enemy lines—disrupting the viral spread of violence.

But just like flattening the curve of a pandemic, it only works if we do our part. To stop the disease of violence, we need you.

Make your year-end gift to stop the spread of violence and remake our world. You’ll give food and jobs for those impacted by violence—and the possibility of a new future.