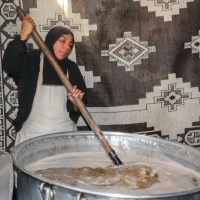 Take the recent alleged chemical attack in eastern Damascus, or the Israeli strikes on Iranian targets in Syria. For most of the world, that’s all they’ll hear about Syria in the news for weeks, maybe longer. Yet here you are, showing up for the people of Syria, again and again.

You were one of the first to show up and help when Aleppo burned—setting up a kitchen that cooked and delivered hot meals back in 2016. Together we’ll be last to leave, helping families rebuild and get back to work.

Here is some of what you made possible in Syria during the first few months of 2018.

Serving Up Huge Pots of Food

Nahla gets to work early each day around 5am. She and her friends spend the morning chopping piles of onions, sautéing them in olive oil, and making savory batches of rice, bulgur, and pasta that are the base of a nutritious one-dish meal. The cooking pot may be the largest you’ve ever seen, and Nahla actually stirs with a shovel!

She fights back tears as she works, remembering the day her husband walked down the street to fetch a bucket of water for the family. She didn’t know that a sniper was waiting and that he would be killed. Their two daughters were also critically injured. Her 15-year-old has never fully recovered. Afterward, Nahla grabbed her five kids, fled to a safer city, and tried to adjust to her new life.

When the family returned to Deir ez-Zor a few months ago, a friend gave them a place to live. But without an income, she and the kids were slowly starving.

That’s when you stepped in and changed her story. You gave Nahla a job—cooking a hot meal five days a week for displaced families. You turned Nahla’s life around.

Now she has meaningful work. Now she can feed her children. The kitchen is filled with other women who’ve been displaced and who encourage each other as they work. Now Nahla has laughter mixed with the tears. Her life has seeds of hope.

Thank you for providing salaries for Nahla and one hundred other kitchen employees. This shows you are committed to more than just meeting emergency needs.

When you provide a salary, a whole neighborhood is lifted. An employee spends part of her wages on much-needed groceries. The grocery store owner feeds her family but also buys paint to freshen the store. The paint supplier feeds his family and has enough money to replace his son’s worn out shoes. The shoe salesman can feed his family and buy the medicine his mother needs. In this way, the whole supply chain is invigorated, and the neighborhood comes back to life.

This is how the cities of Syria can be mended and rebuilt after the terrors of war.

Nahla and her co-workers have served over 1.5 million hot meals to displaced families in the city of Deir ez-Zor this year. They make huge pots of food and deliver them around the city. Other families come with their own bowls and buckets to take their portion home. Your love makes all this happen, ensuring that 31,000 people can go to bed with full stomachs instead of hunger pangs. Thank you for caring! 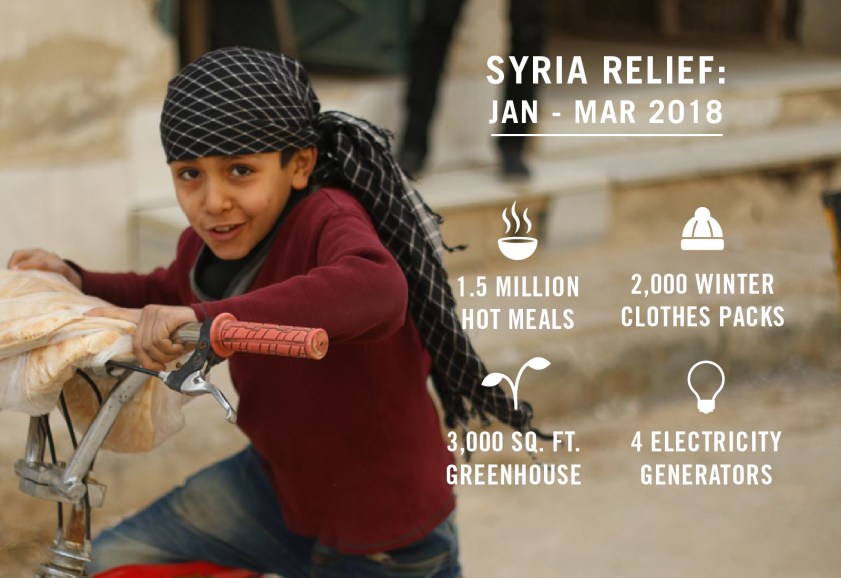 Food is not all you provided for families here. As the cold of winter approached, you found displaced families living in bare rooms in a shelter in Deir ez-Zor. They slept on simple mattresses on the floor among cold drafts. They didn’t have any extra clothes to layer on.

You jumped into action and provided warm clothing for 2,000 people. First you gave wool hats and scarves that were hand-knit by 600 displaced women in another part of Syria. Then you supplied warm shoes, clothes, coats, and blankets, made by 200 displaced women working in a garment factory in Syria.

You not only gave protection from the winter cold; you bought locally and provided vital income for the women making the items. Our colleagues said families in Deir ez-Zor were filled with joy to get warm clothes.

In March, conflict intensified in the Damascus suburb of eastern Ghouta, and thousands of families risked sniper and mortar fire from all sides in order to flee. You met them at a shelter on the frontlines, providing urgent medical care, hygiene kits, diapers, clothing, and other essential relief.

You were there for children like Mohamad, 10. He is too young to remember a time when Syria was not at war. His leg was injured by shrapnel from an explosion—you helped mend his wounds.

We’ve continued to expand our work in eastern Ghouta, thanks to your outpouring of support—stay tuned for another update on all you’re making possible in this part of Syria later this week.

Years of war left Aleppo with few power plants or electric lines. It may take months still before city power is restored. Imagine trying to feed your family, keep your mobile phone charged, or repair your home without electricity.

Starting almost a year ago, you eased this hardship for 120 families. Your gave four large generators for their neighborhood and also keep them fueled and running at a subsidized cost. Providing this precious resource shows your long-term commitment to families here. You make it possible for them to rebuild the neighborhood and re-open businesses. Thank you for meeting this critical, practical need.

The agriculture industry across Syria used to contribute 40% of the GDP and employ about 30% of the workforce here. But now fighting has destroyed fertile ground, damaged the transportation infrastructure, and separated farmers from their land. An estimated $16 billion of crops, livestock, and farming assets have been destroyed.

Last year you helped a group of engineers and farmers in Syria begin an ambitious experiment to address one sector of the looming food shortage—by growing vegetables in a hydroponics greenhouse!

Hydroponics is a way of growing plants without soil, using sand, gravel, or liquid, along with added nutrients. This allows vegetables to be raised in a controlled environment with reduced risk of disease, faster growth, and greater yield. It’s also a vital alternative in areas where the soil has been contaminated by pollutants or chemical weapons and where drought is likely.

On the first attempt, the crop of seedlings withered in a series of heat waves. This was a difficult but valuable lesson.

Now our team is in the midst of the second trial and has made adjustments to the greenhouse. They replaced the plastic walls with perforated cloth to improve air flow and made a hole in the ceiling to let hot air escape. They also installed a spray system to increase humidity during the hottest part of the day. The greenhouse is filled with 3,000 tender young tomato, pepper, and cucumber plants.

While the cucumber seedlings died, the tomatoes and peppers are growing roots and look good.

Stay tuned for more updates on this exciting project. Your investment in Syria’s future not only creates jobs, but also will let families eat fresh produce again.

You are helping remake what violence has taken away.

Thank you for investing in food and jobs for the people of Syria. Your monthly support ensures that families here are not forgotten.