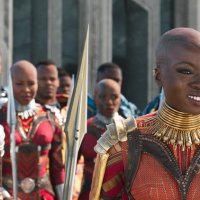 When my husband and I saw Black Panther a few weeks ago, it was with eager expectation to see black women represented wholly different than the tired baby mama, Aunt Jemima, or slave narrative typically offered.

I’d heard great things about how black women in the film were portrayed as strong, intelligent leaders—and it did not disappoint.

But I saw something even greater that I didn’t expect: black women as key stakeholders in the call for peace.

Not just peace in their homeland of Wakanda, but in the entire world set in the Marvel universe. Their voice in the film, held a clear message: preemptive love. (Be forewarned, there are a few spoilers ahead).

The diminished voice of women has always been clear to me. Even as a little girl, my intuition told me that something wasn’t right. And especially as a little black girl, the feeling ached deep in my soul, that my voice and perhaps even my life didn’t matter.

My sneaking suspicions proved true over and over throughout my teen years. And now as I land solidly in middle age, I can acknowledge this reality: women’s pain isn’t taken seriously.

Our claims of harassment or rape are often met as just that—claims to be proven. We are typically guilty of our own abuse until we can prove otherwise.

Women are often the peacemakers, probably because the damage of broken families falls heaviest on our shoulders.

Women are often the voice of empathy, probably because we know its worth, given how little we receive it.

Women often lead the charge at protests begging for peace, probably because we are most often the recipients of gender-based violence.

Women are often the ones speaking out, raging to have our voice heard, probably because our opinions are the most disregarded, opposed, and tabled.

In Black Panther, some of these subtle yet dangerous mindsets against women were not only flipped on their head, but redeemed. The women are somehow simultaneously the peacemakers, the voice of empathy, the protesters, and the (s)heroes!

The fictional country of Wakanda is untouched and unknown by the outside world, let alone colonized. The country is rich in vibranium, a powerful resource that can be used for weaponry, but most importantly helped secure Wakanda’s place as the most advanced civilization on the planet. For years, its people have lived in complete secrecy, known globally only as a small, desolate third-world country in Africa.

For as much as we might love to throw up our arms across our chests and throw up #WakandaForever on Instagram, the truth is Wakanda wouldn’t let any of us in. Not a single one.

Wakanda has secured its borders. They built the wall. They refuse to un-build the wall. Wakandan leader T’Challa flatly refuses to share their seemingly unlimited supply of vibranium or Wakandan technology with the world, even if it means evil can be eradicated.

Until the women suggest they do so.

The women of Wakanda aren’t arm candy who are pushed to the periphery. Okoye is T’Challa the King’s general and head of the military. Nakia (his love interest), Shuri (his sister), and his mother & advisor Queen Ramonda all fully realized people who all have a say. And they use their voice to convince T’Challa that Wakanda is better off…shared.

At first, T’Challa doesn’t listen—an accurate portrayal of living in the tension.

The storyline is left brilliantly left open for further development of Wakanda’s future impact, as they begin to cautiously reveal themselves to the world.

If you want to learn how to wage peace with strength, dignity, and honor, look to the women of Wakanda.

Peacemaker Friday is published weekly to share stories of people unmaking violence around the world. Be inspired. Take Action.