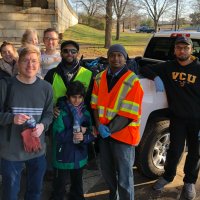 The government shutdown started December 22, three weeks ago, limiting departments and agencies, interrupting basic services. Museums have closed, the EPA has furloughed 95% of its workers, inspections and approvals are halted, and the Department of Housing and Urban Development is urging landlords not to evict tenants who no longer have received their typical assistance.

It’s already the second-longest government shutdown and it’s very possible it will become the longest. And all these frozen assets, these closed doors, these halted services, it’s a painful representation of our polarization, our division. We are so locked into our positions, our beliefs, our ideologies—that a government can’t even function at the most basic level. We have folded our arms, propped ourselves up with arguments, and lost ourselves in the mire of spite.

It’s into this dysfunction and division that one group came forward to see what they could, what peace they could stitch amidst our brokenness. In national parks and monuments, where the government shutdown has voided trash pickup, the Ahmadiyya Muslim Youth Association (AMYA) led an effort joined by people from a variety of faith backgrounds in California, Ohio, Florida, Pennsylvania, and Washington DC to empty trash cans and pick up litter.

No, trash removal is not going to solve the shutdown. New bags in cans are not going to break through the gridlock or convince either side to stop posturing and to start the difficult work of creating a solution.

But in their small act of service, this group created beauty. Where there was inaction, they showed up.

“It’s our duty to come in and serve—not as a show, but as an act of faith,” said Saud Iqbal.

“Serving the communities we live in isn’t just a civic responsibility,” Salaam Bhatti said. “It is actually a part of our faith.”

This is true of so many Muslims we know. Who welcome the traveler. Who show mercy and compassion, even to killers. Who invite others to share in a meal even when they have little to eat themselves.

We can step forward, just like AMYA did. It might be something small, like picking up trash, leaving beauty where there was ruin. It might be checking on those around you most threatened by the shutdown—those dependent on food, medical, or housing assistance.

Chances are, the government shutdown won’t end tomorrow. It seems unlikely either side will blink or take the humble steps to remove themselves from their own entrenchment.

We can’t end it either, not by ourselves. But we can look in our own neighborhood and see what needs to be done. We can build something new together—peacemaking instead of division, remaking our world instead of destroying it.