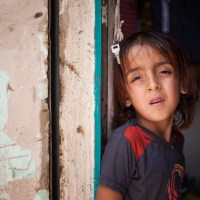 The last time I drove to Fallujah, back in 2013, I had so much hope for this city.

Some of you we were with us way back then. Some of you remember sending our team of doctors and nurses to provide lifesaving heart surgeries for children in Fallujah.

The excitement. The energy. The wide-eyed shock that Americans were welcomed into Fallujah, even after all that happened here.

Over the course of weeks and months living in the Fallujah General Hospital, we began to feel at home. Rhythms of life set in. Things became familiar and comfortable, despite having a security detail with us much of the time—a camo-clad, machine-gun-toting, ever-present reminder that this was still Fallujah, the city once called “The Bomb Factory.”

The US Army leveled whole sections of Fallujah in 2004, during the Iraq War—after which, one US military officer declared, “No American will ever be welcome here again.”

Maybe. But our team of peacemaker doctors and nurses were welcomed with open arms. Local news crews heralded the event. Families came from all over to have their children served and saved.

Abdullah, Ahmed, and Ismaa—three of the children who received lifesaving care on our medical mission to Fallujah in 2013. Photos by Matt Willingham/Preemptive Love Coalition.

There was one particular moment sitting on an ICU bed with a little boy named Ahmed, when I remember feeling a full, true, total sense of hope.

Less than a year later, Fallujah fell to ISIS.

The battle to liberate Fallujah in 2016 sent thousands pouring into the desert, running for their lives, caught up in the nightmare of war yet again.

When I got the chance to return to Fallujah this summer to see how the city is recovering from the war with ISIS,  I couldn’t wait to be back.

It wasn’t long before the excitement faded. As we drove through the streets of Fallujah, I barely recognized the city.

A friend pointed out a famous landmark. I didn’t know it.

I spotted a restaurant that serves my favorite kabob in the universe, but it’s totally different now—rebuilt after being hit by rockets.

I told myself, If I could just see the hospital. That was the place that became like home for me. In my heart and in my memory, that’s the building that stands as a symbol of hope for Fallujah. It’s the place where you and others in this community helped save lives. It’s where you gave whole families a future.

“Can we visit the hospital? Just to see it?”

The driver turned onto a main thoroughfare and doubled back toward the city center, abruptly turning into a long drive.

I read the sign that said “Fallujah General Hospital” as we waved to a security guard.

“Yes, this is the hospital.”

I didn’t recognize it.

Big, gaping holes pockmarked the entrance and roof. The building was burned and broken. I had no memory of the place.

The lead doctor from those days, who lives in Baghdad now, explained that the hospital  was so badly damaged in the battle with ISIS, it’s even hard for him to recognize it, even after working there so many years. He said he can hardly bear to go back and see the building like this. It’s too painful.

As we left Fallujah for Baghdad, I felt dizzy and ashamed, but I wasn’t sure why.

We poured so much of ourselves into this city. We defended it when people claimed that all Fallujans were terrorists. We loved those kids and had so many laughs around the dinner table and amazing moments with people who were supposed to be our enemies.

And that’s it. That’s the greatest hurt of any disaster. It’s not the destroyed buildings or the ruined stuff that hurts the most. It’s the realization that some part of our own self was in that place, and it’s gone now.

We put a piece of ourselves, our hearts, into a place. We make it home. We love people there. We laugh and eat and live as a beloved community against all odds, and a little piece of our hearts sticks to the walls. The halls still smelled like our love. Those operating tables, that ICU, carried traces of our hope and joy and everything else we poured into that place.

When the bombs landed on that building during the war with ISIS and it caught fire and people died and blood hit those floors, those moments also came under attack.

It’s no different in any other disaster.

When a family who survived Hurricane Harvey last year came back to a home destroyed, they weren’t just crying over some building. They weren’t aching and hurting over stuff.

They’re hurting because, when that water drowned their home, it drowned a part of them, too.

When families move back to Mosul or Aleppo or other war-ravaged towns to start rebuilding, they don’t complain about the loss of stuff. We’ve seen countless people stumble toward their war-wrecked home for the first time, weeping and speechless—not because of the stuff they lost, but because of what it represents. It represents them.

It’s their life, love, work, passion, family, and future that came under attack.

That’s why we never say, “At least you and your family survived. That’s all that really matters, isn’t it?”

That misses a profound truth about home and place. You may have escaped with your body unscathed, but when a place you called home is destroyed, it absolutely affects you.

I got a teeny, tiny taste of that in Fallujah, staring at this hospital building I once loved. We poured our hearts into this place, and it’s gone.

So now, weeks after my trip to Fallujah, I was supposed to write something about it and, to be honest, I’ve avoided it, because we’re supposed to be the people who hope.

You and all of this Preemptive Love community, we find hope in the rubble, in the stories of loss. Even when bullets are humming past our heads or hateful mobs are shouting one another down, we’ve been the people who find hope.

But sometimes, lament and pain have to come first. There can’t always be hope all the time, and today we mourn the loss in Fallujah and across this region.

That is clearly not the only story here. On our visit, we saw first-hand how families are rebuilding their lives, how they’re getting back to work—and how you are making that story possible.

There is absolutely hope in Fallujah, and in the days ahead, we’ll share these stories too.

But we must not ignore or overlook the loss. If all we see is the loss of things, then we do not see the people of Fallujah as they deserve to be seen.

Charities and nonprofits have to constantly celebrate success and make sure they demonstrate impact. We need you to keep giving, right? Of course—and your money has transformed lives in Fallujah and dozens of other war-torn places for the better!

But it’s also important that we slow down and acknowledge the loss of those things that can never be replaced, not with money or work or vision. They’re gone.

So to all who lost the life you loved, we honor you.

To all who saw no other choice but to speed away, with your burning home in a rearview mirror, we hurt with you.

We know that nothing we or anyone else can do will ever replace what you lost. We see you starting over, putting more pieces of yourself into this new place, working to make it home—and we celebrate your strength.

One of the most important things we can do as humans is plant pieces of our self in the ground, right where we are, and believe it will grow and yield good for all. The fact that you, a refugee, would do that, despite all you’ve endured, is a kind of invisible heroism most people will never notice.

But we see you.