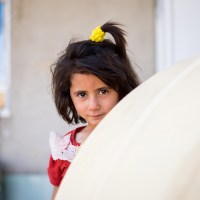 This is Rasmia, and she’s finally home.

When ISIS overran her town and drove her family into the mountains, Rasmia’s family wondered if they would ever see home again. Rasmia was a toddler back then, but her parents say she roamed freely.

Before ISIS, the world was hers, and she explored it without fear.

Today, that’s all a distant memory. Rasmia’s family is one of the few who chose to blaze a way home after ISIS was finally defeated, but Rasmia is kept close to the house now. No more roaming.

When we ask why, her dad tells us: “The terrorists left mines and explosives all over the place. We want to start our life again, but we are worried for our children.”

The worry is obvious in dad’s eyes. It’s terrible to imagine little Rasmia chasing a cat down the street or playing hide-and-seek and setting off an explosive. Dad goes on to point out that there are also no hospitals, clinics, markets or neighbors or organizations or anything, really.

Apart from local militias and occasional military convoys ambling along the dirt road near their home, the family is alone. Just them and their sheep, surrounded by empty buildings, rubble, and booby traps—dark reminders that even in defeat, ISIS still has a grip on their lives.

It sounds hopeless, doesn’t it?

I sure felt hopeless, sitting with the family and thinking about living like that for days, weeks, months. You provided the family with hygiene kits that day—and the family was so grateful!—but it felt like a drop in the bucket.

How could any organization, even any government, clean up city after city when it’s full of unexploded bombs?

How can anyone jump start an economy, help people get home, make sure they’re fed and safe, promote reconciliation between communities at odds, and everything else it takes to get life back to normal?

It’s too much. You’ve made incredible things possible over the years in war zones all over the place, but we just can’t do all that.

But what if we look at the situation a little differently? Instead of all the problems, let’s focus on Rasmia and her family—what we can do for them.

We can come alongside them. Their community fled certain death or enslavement and now lives scattered. Who will call them home?

Rasmia’s family are the hero trailblazers who can call their people home. They deserve our support because here’s the secret: amazing things happen when we support the first families who go home.

Thousands of families are still waiting in displacement camps. Their lands were freed months, even years ago—so why don’t they go home? Why live in a tent when you could move back home?

Think about it: if your town were full of bombs and no running water or markets or working schools or electricity, would you go back? It’s hard to be the first ones home, but humanitarian organizations and governments rarely start rebuilding until people are actively going home.

Rasmia’s family went first. We want to be the people who go first—with them.

We may serve fewer people this way than we can if we dump tons of food at a refugee camp, but we serve the trailblazers knowing they report back to their friends back in the camps: An organization came and gave us soap and food and support! You should come back. People will help us go home.

The trailblazers become a symbol of hope for home, and they need our support.

Mine disposal organizations like our friends at MAG (Mines Advisory Group) typically won’t begin removing mines and traps left by ISIS until they get confirmation that other humanitarian groups  are also working in the area. But many NGOs refuse to work in areas littered with mines and explosives.

It’s a stalemate, unless you and I choose to show up where others won’t. When we take the risk and go anyway, love anyway—we show people what’s possible. We’ve seen it again and again: your frontline love makes incredible things possible.

We’ve been in so many meetings with other organizations who were sure it wasn’t possible. They’ll say “Those roads aren’t open yet,” and we tell them. “We just drove those roads yesterday.”

They’ll say, “Nobody has returned to that town yet,” and we tell them about Rasmia and her family.

Some may look at Iraq and assume things are fine now. Isn’t ISIS defeated? In a way. They don’t control physical territory, but they still have a choke-hold on those still in camps or living in exile—those who would rather stay there than risk coming home. Until we prove to people that “home” is safe and secure and stable, ISIS won’t be defeated.

Recently, you sent more aid to trailblazers like Rasmia’s family in the form of huge bags of food. It’s only a first step on the road to recovery for families like Rasmia’s—a road that must also include the longer, harder work of rebuilding communities and creating new jobs and restoring livelihoods.

But that first step for these first families to respond—it opens the door to a new future for these trailblazers and those who follow them.