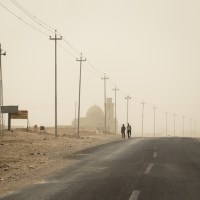 In the opening days of World War II, Europe experienced the original “shock and awe” campaign. Nazi Germany’s military forces unleashed unprecedented terror onto neighbouring countries. They were the first to use modern technology at immense scale, in order to launch “an intense military campaign intended to bring about a swift victory.”The Germans called this blitzkrieg, which translates into English as “lightning war”.

The Nazi’s entire fleet of tanks was equipped with radio equipment (a first in the history of warfare), their planes filled the skies, and Allied forces were shocked and terrified by the Nazi’s unexpected show of force. It was unlike anything anyone had ever seen before.

English-speaking politicians and media needed to find a way to convey the horror they were seeing to those far from the front lines. English is a fluid language—it changes all the time. New words enter our vocabulary regularly to describe new technology. Computer, cell phone, router…these are either new words in our language or new uses of old words (in the case of ‘cell’). The meanings of words shift and change with time.

In 1930’s Europe, English-language media could have coined a new term for this new kind of warfare. But they didn’t want to simply transmit facts—they wanted to transmit the feelings of terror they were experiencing on the front lines. So they borrowed the enemy’s own word, blitzkrieg. Every time the word was used, it conjured feelings of fear.

When Nazi forces failed to win the military victory they desperately wanted (and frankly expected), they stopped using the word blitzkrieg. In a few short years, the feeling behind the word had changed so significantly that the meaning of the word began to shift. But the word no longer belonged only to the German language, it had been brought into the English language, and would have a separate life and use in English.

Okay, but what about jihad?
Recently, controversy erupted around Muslim American activist Linda Sarsour, when she used the word jihad to characterize resistance to policies and political leaders she views as unjust.

In the Arabic language, the word jihad has existed for more than a thousand years. It has had a wide range of meanings over time—the way the word has been used changed as society changed, as is the case with all living languages.
In every case though, the word has been connected to some kind of struggle. That’s the literal translation of jihad in English—to struggle or strive. Sometimes it refers to a defensive military struggle, sometimes to political struggles for justice, and sometimes it refers the internal, spiritual struggle of devoted believers striving to develop a more righteous character. Sometimes the word has been used in ways that were never intended originally—such as ISIS’ offensive war against anyone who isn’t like them. 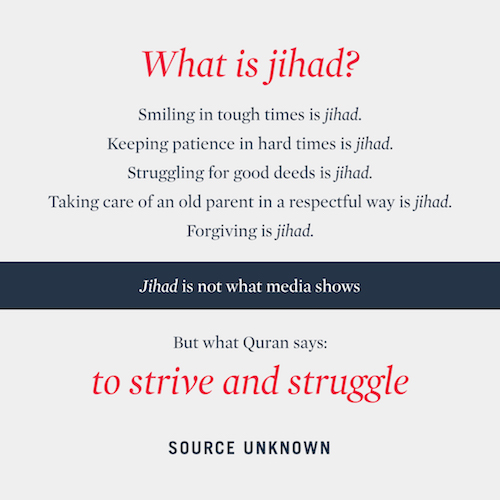 The word jihad was first brought into English vocabulary in 1869, during a time of intense societal turmoil. The United States had just come through a civil war that tore through families and nearly tore the country apart.

Around this time, there was a move to impeach the president, Andrew Johnson. (It failed by one vote.) The 14th amendment was ratified, giving citizenship—a voice and power—to former slaves. Laws were passed against the activities of the Klu Klux Klan. The Colored National Labour Union was formed to give voice and power to freed slaves who struggled to carve out a new identity for themselves. The American Woman’s Suffrage Association was formed to give voice and power to women who struggled to win the right to vote.

Struggle. This perfectly describes America in 1869.

Power and class structures in America were shifting quickly, and with that upheaval came incredible fear. Some might say that African Americans and women in the US were engaged in jihad—they were in a struggle for justice, of good versus evil.

The United States wasn’t the only English-speaking country which was experiencing changes in power and class. At the same time, Britain was struggling with uprisings from indigenous populations in countries they had colonized—India, Egypt, and Sudan. It was the actions of Mohammad Ahmed, a spiritual and resistance leader in Sudan who “waged a vigorous jihad against the British to liberate Sudan” which brought the term jihad into the English language. Sudanese Muslims used the word to describe a defensive war against brutal foreign invaders. Not surprisingly, the British painted Sudanese resistance fighters as villains.

The word jihad in English-speaking culture has evolved separately from the word in Arabic and Muslim cultures.

In much of Arabic and Muslim cultures, the word is used now to describe the personal, internal struggle to live in the righteous path of God.

In English-speaking culture, the use of the word evolved very differently. When the word jihad was first brought into English, it wasn’t often used. In fact, if you chart usage between 1869 and 1910, you see a pretty flat line. The word began to be used more frequently around the time of World War I. It was used more and more frequently around the time of World War II, and again during the Cold War period (1947-1991). Each time U.S. society was in a state of turmoil and fear, use of the word increased.

And then the terrorist attacks happened in New York City and Washington, DC on September 11, 2001. At a time when the U.S. felt its most vulnerable, use of the word jihad in the sense of an “unjust war against us” took off.

At any point, English-speaking culture could have used an English word or expression to communicate meaning, but instead, they chose to hang onto the Arabic word—the foreign word that brought with it feelings of fear.

In every language, words are tools we use to help communicate ideas. We choose the tools we need depending on circumstance. Words are powerful.

In her speech to the Islamic Society of North America, delivered in English, Linda Sarsour used the word jihad in a particular way that her audience of fellow Muslims would immediately understand.

“I hope that when we stand up to those who oppress our communities, that Allah accepts from us that as a form of jihad…”

In a room full of Muslims who shared in her struggle for more just hearts, and a more just world, there was no controversy. Outside that room, however, when video of the speech began to circulate amongst groups who aren’t Muslim, there was an uproar.

For those who misunderstand and mistrust Islam, they heard a call to war against the U.S. president and U.S. society.

The United States and Britain in 2017 have a lot in common with their former selves in 1869. It is a time of intense societal turmoil. Power and class structures in the U.S. and Britain are shifting, and with each change comes incredible fear.

So, What Is Jihad?

The broad definition has always been “struggle.” But the particular definition of jihad depends on who you are, what your purpose is, and when in history you were using the word. 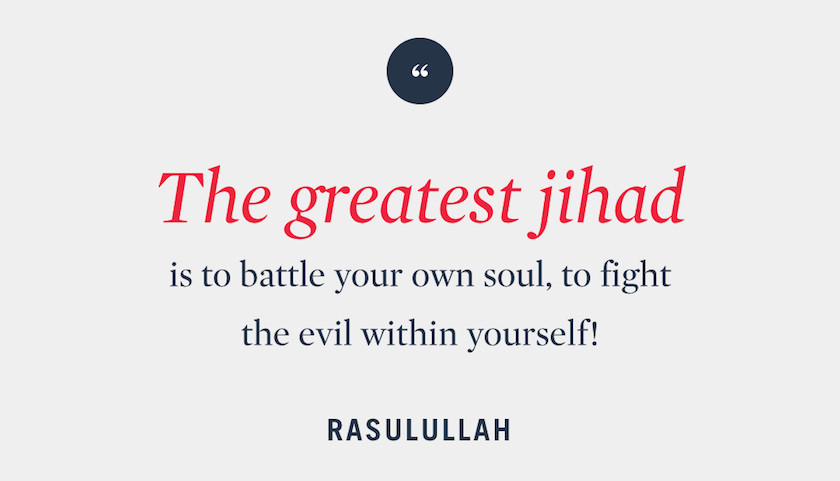 In current English-speaking, non-Muslim contexts, the meaning of jihad has much more to do with our own culture and our own fears than it does with Muslims and their faith.

There is no single use for the word jihad. The next time you come across the word jihad, pause. Ask yourself who is using the word, and ask what they intend by using it—ISIS? Scholars? Justice activists? One of the millions of followers of Islam around the world?

Perhaps then the word jihad can come to mean our struggle to understand our neighbours more.