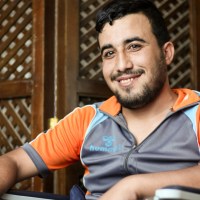 Khader leaned forward in his wheelchair and spoke slowly, clearly: “My dream was to become a teacher so I could teach the next generations that come after me.”

Notice the past tense: “My dream was…”

When people think about destruction in places like Iraq or Syria, they assume it starts with gunpowder, warplanes, soldiers. For the ancient city of Mosul, the destruction began long before any fighting reached its gates.

Under ISIS, professors in Mosul were executed. Doctors were forced to perform gruesome experiments or to only treat ISIS fighters. People thought to be gay, lesbian, or of other sexual orientations were thrown from tall buildings.

Countless historical monuments, buildings, or artifacts were gathered and destroyed just in Mosul. A veritable treasure trove of our priceless shared history, erased.

But ISIS’s longest lasting destruction is much more subtle than that. Their darkest design is quiet, invisible, but leads to utter and complete devastation. It is the destruction of hope.

The hopes and dreams of millions of people were utterly crushed.

By “hope,” we mean the belief that things can get better, that things will work out, that some higher power—be it government, God, or something else—is with us, cares for us, and will bring us through.

How many times in our years of loving refugees have we heard them say “I just wanted to die”? How often have we heard young people who should be dreaming and scheming and falling in love, instead talk about having no hope, no belief things will ever get better. Dead dreams.

It’s devastating, loving people who feel hopeless. But this is the most important thing you and I can do, and it’s the goal of everything we do together. The food deliveries and job creation and training and empowerment are all done to resurrect dead hopes, because when you resurrect someone’s hope, they come back to life, too.

And that’s the beauty of this work we do together: hopelessness can be unmade. Hope can be restored. People can believe better things are coming, but we have to believe and work toward that with people, starting with listening to them.

One of the people we love and believe in is Khader.

Ever since he was very young, Khader knew what he wanted to do with his life. For him, teaching was the only future he wanted. He worked hard in school and was just a year from graduating when things took a turn.

It’s a terrifying progression: scattered thoughts of war turned to concerns, turned to fears, turned to a literal war at his doorstep. Khader’s family had to run.

The twelve of them arrived safely in Mosul, thinking such a large, important city would be safe from ISIS. The Iraqi military would never let their second largest city fall, right?

The young man’s dream of someday teaching seemed out of reach. ISIS remade Mosul’s once great education system in their own image, prohibiting girls and young women from attending school while teaching young men how to fight, murder, and live out their violent ideology. It was not the kind of education Khadir wanted to receive or pass on.

When you resurrect someone’s hope, they come back to life, too.

“My father didn’t have a pension or any income, so I sell vegetables around town.”

Then the battle for Mosul began. ISIS fought to hold the city, but they were pushed back, deeper and deeper toward the old city.

One day, Khader was walking across a street in his neighborhood when a mortar hit nearby and shrapnel pierced his back. He was instantly paralyzed. He’d already lost hope of ever becoming a teacher, now he lost the ability to walk, sell vegetables, and help care for his family.

On the day we met Khader, he was pretty discouraged, but you gave him a little hope in the form of a new wheelchair. It isn’t just some junky old wheelchair, either. Khader and dozens of other disabled Iraqis received brand new wheelchairs sized to fit them.

We exchanged numbers with Khader, chatted about his hopes for the future, and discussed what more we might do to help him—whether through an empowerment grant or a potential opportunity through WorkWell.

Despite everything he’s been through, he’s still holding on to his childhood dream:

“Most of all, my hope is still to become a teacher and to achieve my dreams.”

Help young people like Khader resurrect their dreams and rebuild their future. Give Now.