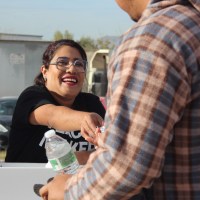 [Update from the field: This distribution took place a couple of weeks ago when there was a big camp of Venezuelan asylum seekers staying beside the border between Mexico and the United States. Last Sunday, Mexican authorities attempted to persuade the asylum seekers to abandon their camps and board buses headed for shelters. Mexican authorities took away the tents, and now our friends are being relocated to some shelters.]

With immigration policy changes, many of our friends from Venezuela decided to stay beside the border between MX-US, hoping to have the opportunity of crossing to the US. The reasons for leaving the country are manifold – ranging from seeking access to health care and education, which have collapsed in many parts of Venezuela, to searching for employment and because of the lack of opportunities to get food.

We have been spending time with the asylum seekers at the border. There is always a wide range of home countries represented there, but when we began meeting significant numbers of migrants from Venezuela, we knew we had to respond in a special way.

We know from our colleagues in Venezuela that arepas, a type of flatbread, are food for their souls. We asked the owner of a local Venezuelan restaurant if she and her staff could cook some arepas for a hot meal distribution, and they got really excited and immediately agreed to do it.

A Local Partner who Sought a New Life

That’s how we met our new friend Dayana. She knows the story of those waiting at the border from first-hand experience. She had an ordinary life back home in Venezuela: “I worked in a healthy pastry shop, and everything seemed to be in order. Then the social and political problems began to explode. Protests against the government started, the dollar increased unimaginably, and things became scarce.”

She could not be idle and watch her country become tattered. Dayana wanted to be heard by the government, so she joined the protests. Unfortunately for her, the government issued an order threatening to kill anyone participating in a demonstration of “civil unrest.”

Due to all of these complications, Dayana had no choice but to leave her home and look for a place to build herself a better future. She found a contact in Mexico who was hiring Venezuelans. They offered her a job, a place to stay, a salary, and even tickets for her flight. It was almost too good to be true.

The reality is that the offer came with some serious disadvantages. First, she would arrive with a tourist visa, meaning she would have to work illegally—at least at first. And second, she would be working in the border city of Juarez. At that time, Juarez was considered one of the most violent cities in the world, on top of being twice as unsafe if you were a woman.

Even so, she decided to take the opportunity with the hope of being able to grow and help her family. Her original plan was to leave for six months, saving enough to return and work in her business in Venezuela.

At first, she felt alone since she didn’t know anyone and was afraid of the city, but step by step, she began to build relationships and make friends who later became her family. Four months later, based on effort and dedication, she established herself in Juarez and began sending money to her family in Venezuela. Later, her family told her that despite receiving the money, they could not use it. In those days, store shelves were bare. Even if you had money, there was nothing to buy.

As more time passed, Dayana decided to take two jobs, using only a minimum part of her salary for her living expenses since the rest was divided between sending it to her family and saving for her own restaurant. She dreamt of opening a Venezuelan food restaurant in the city because she realized there was nothing similar around, there was by now a sizable Venezuelan community, and she also missed her country’s food.

After two years of hard work, a lot of planning, and a very tight budget, she finally achieved her goal and opened her own restaurant. Over time the restaurant began to be noticed, allowing her to earn enough to bring her mother and brother to the city of Juarez. The travel cost to get someone from Venezuela to Juarez was approximately USD 3,000. Dayana had to pay twice for her mom because she could not cross the first time. Fortunately, her brother only needed one attempt. “In the end, I paid almost USD 9,000 to bring them, and let me tell you something, for my family, I will give everything I have.”

Dayana spent two years paying off her debts while she juggled maintaining her business and her family. Still, all the hardships she endured paid off because now her restaurant is a sustainable business with no significant debts. “Now I feel comfortable in the city. The truth is that I was scared when I first arrived, and I didn’t like that there weren’t many things to do. In my country, I had the opportunity to go to the beach often since it was close. In Juarez, the closest beach is very far”. It’s thanks to the attitude and kindness of the people that she fell in love with the city and now considers herself a “Juarense.”

“Seeing my compatriots with the hope and expectation of being able to cross the border made me feel seen because that is the reason why I left my country. I felt bad seeing their conditions, and it made me very sad to see that they were sleeping in the streets with nothing to eat or wear.”

“Many Venezuelan people coming to the US [border] have a degree; they worked in Venezuela with a successful life, and then everything changed, and the only solution for them was to leave the country.”

As soon as Dayana discovered that the US government was deporting people from Venezuela to Mexico, it was as if she was watching a movie. Imagine people wanting to feel safe, and finally achieving their dream of being in the US, but then everything changes, and they are now abandoned in another country. She remembered her family and the depression she suffered when she tried to bring them.

She didn’t want to waste another minute and made her restaurant a point of distribution. She started collecting food, diapers, essential things, and clothes and gathered with other friends and Venezuelan people from Juarez. They went to the government offices and brought the items donated.

Dayana also wanted to make some arepas and give them to migrants so they could feel more comfortable and have tasty food. She even made some videos and campaigns to invite people to participate and help. People collaborated more with good clothes and hygiene kits thanks to these videos.

One distribution transformed into a daily visit to government offices and the emergency shelter that the government opened. “Now I was thinking about them all the time; I remember one day it was raining so hard, and I was worried for them. Do they have something to cover themselves with? Are they healthy?”

For her, these arepas distributions were a way to delight them. Spoil them. At the heart of Venezuela’s food history and culture, arepas are essential to every meal.

The criticism from people around her has not stopped: “You are wasting your time”, “That’s not your job” and “Let someone else take care of them” is what she hears. However, she wishes to continue visiting these strangers that feel so close to her just because she sympathizes with their struggles, hopes, and dreams. More importantly, she knows no matter where you are, meeting people from your country, your home, can be as soothing as a warm arepa for your heart.

Dayana says, “I wasn’t a big fan of doing humanitarian work because I had never experienced it or done it before. But now that I started, I can’t stop. I don’t know how to explain what I felt when I saw their faces when they received our help. It pays less [but] the reward is so much more.”

Our new friend Dayana is part of a beautiful new community of migrants and refugees. They aren’t from here because they have a different culture or accent, but they’re also no longer part of their home countries because they know they can’t return. “I want to thank Preemptive Love for making this arepas distribution possible. Believe me when I say my people will never forget this gesture.”

“It’s nice that Mexicans care about my people. This is what gave me more love for Mexico and Juarez. Thinking about those small details makes a difference for my people.”

There are many ways to bring aid to those in need. This is the way we choose: to help local businesses, inspire others to share their blessings, and bring a ray of hope to those with nothing. Together, we are building a community of love and peace around the world, one meal at a time.