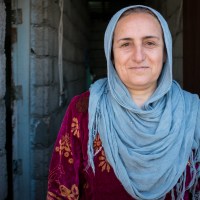 “Oh, you have tea cups. If you have teacups, why do you need our help to buy food? Why don’t you sell your teacups?”

Jameela stirs sugar into small glasses of tea before standing to serve the handful of women gathered in her home. Tea glasses are cheap enough to buy new. Her used set might fetch a few cents. Maybe a dollar if the buyer was generous.

Of course, then she and her sons would have no glasses to drink from.

As she tells the story of an earlier visit from another aid agency, it is clear that it’s still painful to her. They left without giving her family any help.

Then she tells us about a visit from another aid agency.

“Oh, your older son smokes? If you can buy him cigarettes, you can afford food.”

“Wait!” Jameela replied, “He has nothing. He has nothing. His father left. His brother left. We left everything behind in Syria. This is the only thing that gives him some kind of peace, and it’s not even expensive. I can’t buy food for the same price that I can buy some cigarettes.”

This second organization left without helping, too.

Life wasn’t supposed to turn out this way. Jameela did everything “right.” She studied hard and became a teacher. She got married, bought a house with her husband, and started a family. She raised her sons to study hard and told them what she had been told—if they studied and worked hard, they would get good jobs.

Jameela spent every holiday with her extended family, invested deeply in relationships, and made sure that her sons knew where they came from and knew the love of their family.

But this morning, we sat down with Jameela not in her hometown in Syria, but in a tiny raw cinder block home in a refugee camp in Iraq. She and her family fled with little, and the years in Iraq have not been easy.

We sit on mats on the floor, shoulder-to-shoulder with Jameela and her neighbors, as a pile of colorful yarn is divided between the women, ahead of being crocheted into small chickens. You helped each of these women start their own businesses, giving them the tools they need to transform their skills in sewing and crocheting into income for their families. 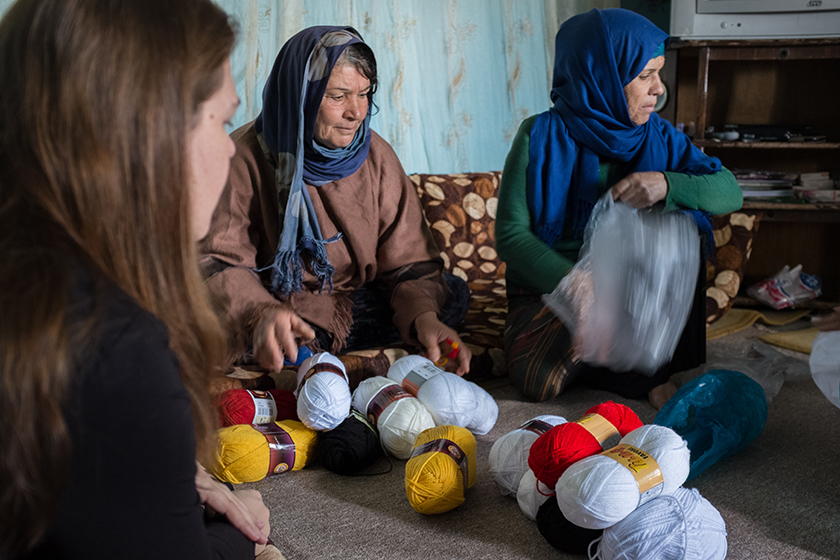 In the intimacy of this group, gathered to talk about their businesses, something in Jameela cracks. Stories of the unfairness in her life begin to spill out.

She tells us how her oldest son comes home every night to warm his aching hands at a small portable heater, after carrying heavy concrete blocks all day. He is so smart—always at the top of his class in Syria until they had to flee. He needed just six more months to finish his degree. The universities in Iraq won’t recognize his credentials or accept him into their programs. Despite years of hard work focused on his studies, he labors for little pay. He has a family of his own to support now. School and a good career are a forgotten dream.

She tells of all the people who encouraged her family to move into a refugee camp after they spent all their income on rent and on medicine for a teenage son who is sick—when there wasn’t enough left for food.

“You will be looked after in the camp,” they said. “They will provide food and medicine.”

But for the first year that Jameela’s family lived in the camp, the only thing that was provided was a small plot of dirt. They bought a tent for $500—their first dwelling in the camp. They spent a year filling out paperwork to qualify for aid.

There was no help with food then. No medicine for her son.

She tells of all the people who told her family to risk the harrowing journey to Europe. “In Europe, everything will be easier,” they said. “Your husband will find work, and your son will get medicine.”

The situation in Iraq felt so hopeless, Jameela and her husband made the agonizing decision to sell their home back in Syria and use the funds to pay smugglers to take her husband and son to Europe. At least there would be medicine, and they could send for the rest of the family later.

None of them expected it to take a year-and-a-half for her husband and son to finally make it to Germany. They didn’t expect that it would be years before they could try to send for Jameela and her other sons.

She tells of being treated so badly at a job that despite their need, her husband encouraged her to quit.

She tells of the danger she and her family, part of the Kurdish minority, faced in Syria before they fled. “If you don’t send your son to serve in the military, they kill your whole family.”

“And it was the same for ISIS,” Jameela continues. “ISIS says that Kurds are infidels, so it is permissible to take their wives and property and kill them. Under ISIS rule, you are told, ‘This is your house, you have to stay there.’ You have no freedom. They rule you.”

Long before Jameela had to flee her home, she and her family were treated as second class citizens. “In Syria we were treated as foreigners. We couldn’t get our citizenship [or passports]… I wasn’t able to be employed because the government didn’t accept me.”

Families like hers weren’t even able to name their children as they wished. “My cousin’s name was Jwan [beautiful]—they refused to accept it because it was a Kurdish name. So they used the Arabic equivalent, Jameel. When we took our kids to school, they asked us, ‘Why do you use these names?!’ And we told them—these are our names.”

Despite working so hard and doing everything “right,” Jameela has heard the same message her whole life—she isn’t enough.

To other Syrians, she isn’t Syrian enough because she’s a Kurd.

To ISIS, she isn’t Muslim enough.

To aid organizations in the camp, she isn’t poor enough to deserve their help.

Wrapping it up here wouldn’t tell you the whole truth of Jameela’s story, though. Her life is hard, but it is not hopeless.

Jameela meets each accusation of unworthiness as she always has: with generosity. 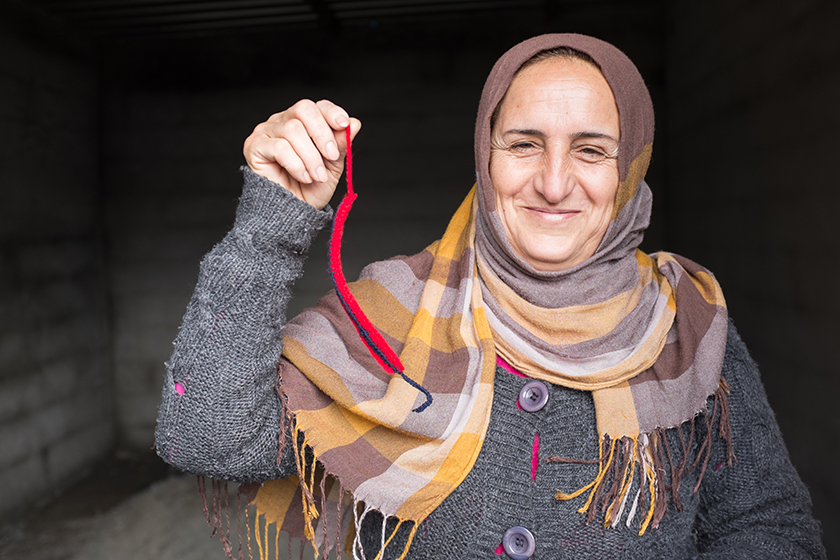 “There are some families…”

Even though Jameela has so little, she never mentions her own material needs. Instead, our conversation is peppered with the needs of other families that Jameela knows, her neighbors in the refugee camp.

“I met them here—they are from Kobane [northern Syria]. They need help.”

Jameela is already helping these families with the little that she has. She wonders if we can help too, more than she is able to do on her own. This is her way—always making connections between those who have need and those who can share.

And then there is Gule, Jameela’s next-door neighbor. Gule sits in the circle with us this morning, taking everything in. Jameela is teaching her to improve her crocheting skills so that she can earn some money.

In a camp so full of hard situations, Gule’s need stands out—unmarried after spending her life caring for her elderly parents, she is now displaced and living alone in the refugee camp. She has no work, no savings, and no one to look after her. But she does have someone who looks out for her.

When Jameela learned that Gule couldn’t afford to pay for electricity from the neighborhood generator, she ran a power cord and a light from her own home to Gule’s.

When she learned that Gule was often afraid at night, Jameela invited her into her own home to sleep.

And despite what might someday become competition for her own business projects, Jameela is investing her time teaching Gule skills she can use to earn a living, too.

“We have tight relationships, we want to live with all our family members together.” Jameela’s own family is broken apart, spread across three countries, so she knows a little of Gule’s pain. She lifts Gule’s aloneness with her open life.

Sitting here in Jameela’s home, the need is undeniable—but so is the hope. It can be heard in Gule’s voice as she starts singing traditional Syrian songs.

So many of the women we work with are just like Jameela—they make life in refugee camps bearable for each other.

They are enough, but they often don’t have enough to move forward toward the future they hope for. Thank you for standing in the gap for with these women who are bravely and resolutely facing life’s difficulties head-on.

Please continue to show up for the many more who are waiting for someone like you to believe that they are enough.

Show the brave women of Iraq and Syria that they are worth investing in.