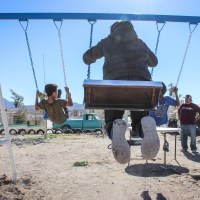 After braving violence, cartels, and smugglers for a shot at crossing the border, parents and their kids need a break. They need a chance to catch their breath and reconnect as moms and dads and children, not as people running for their lives. Children need a chance to play without having to worry about being caught in the crossfire of rival gangs. They need somewhere they can let out some energy with other kids who know the same kinds of trauma.

At one shelter for asylum seekers on the Mexico-US border, parents dreamed of a playground where their kids could heal. So that’s exactly what the Preemptive Love community of peacemakers partnered with them to create.

Kendi and her son didn’t die when her husband threatened to kill them, back when they lived at home in Honduras. They didn’t die after they fled, when the truck they were traveling in caught fire and burned all of their belongings. Kendi and her boy didn’t die when smugglers left them locked in a refrigerator truck for days without food or water, or when they were turned out into the sand desert near Mexico’s border with the United States, still no food or water in sight.

By the time we met Kendi and her son at a shelter in Mexico, alive but exhausted, it felt like no small miracle that they were both had survived.

Hundreds of thousands of people desperate for a safe place to land make the same journey as Kendi and her son. They flee from domestic violence, gang violence, drug industry militias, and more. Many make their way north through Central America to Mexico, in an attempt to reach the United States. They take extraordinary risks, even though their chances of success are low. And while they plan their trip across the US border (or regroup for a second or third attempt) many stay in shelters tucked into neighborhoods along Mexico’s northern border.

As welcoming as shelter staff is, the unfortunate truth is that some of these Mexican neighborhoods are just as dangerous as the places migrants fled from, and have struggled with violence for years. Along the border, the high-profit margins for drug smuggling and human trafficking bring cartels to war with each other as they protect territory and opportunity. For shelter residents like Kendi and her son, it’s simply not safe to go outside the shelter gate—murder and kidnappings are a regular occurrence.

At this point in their journeys, migrants and their children need a break. They need a chance to catch their breath and reconnect with each other, simply as parent and child, not as people running for their lives. The children need the chance to play where they don’t have to worry about getting caught in cartel crossfire, where they can let out some energy with other kids who know the same kinds of trauma. Parents staying at this shelter dreamed of a playground where their kids could heal a little, and together we helped make that happen.

Wooden planks, metal piping, and chains were the perfect building materials—easily available locally and sturdy enough to hold up any number of kids wanting to play. Men staying at the shelter, many of them experienced craftsmen in their home communities before they fled, were glad for the chance to build something useful. Not only could they create something to bring joy to their families, but they were eager for the chance to work out the stress of their journeys.
The climbing tower and slide, seesaw, monkey bars, and swings are used every day now. The playground gives kids something to do outside their room in the shelter. And for parents who have signed up for our tech training pilot project, it gives them the chance to learn and participate because their children have something fun to do nearby.

We expected the playground to be a big hit with the children. What we didn’t expect was to find parents on the play structures too. For some of these parents, this is the first time they’ve seen playground equipment; their first chance to sit on a swing, tip their head back and feel like they are flying. Sometimes a playground is just a place to play. Here in Mexico, it’s a place for healing, where those who are fleeing violence, can fly.