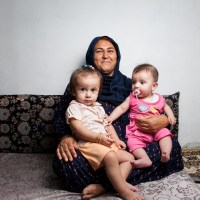 Who are the Kurds?

If you picked up a map, and pointed to a spot on the far north-east of the United States, and asked “Who are Mainers?” the answer would be complicated. Residents of Maine are as varied as people anywhere. But the answer would also be framed by geography. If you want to know who Mainers are, you have to look to the forests and the Atlantic Ocean.

If you want to know Australians from Alice Springs, the desert frames their story. If you want to know about the people of Inverness, Scotland, you look to the Highlands. Their identity is much more than geography, but the notion of place informs it.

So who are the Kurds?

They’re an ancient people group who have called the long stretch of mountains and surrounding plains of the Middle East home for thousands of years. Their identity has been formed by the mountains. They’re used to living in difficult conditions, resilient, and fiercely loyal to their communities. This has been a constant.

One People, Stretched Across Four Countries

But over the centuries, political borders have shifted, as land was carved up by rulers staking their claims to power. The mountains haven’t moved. The Kurdish people haven’t moved. But the power structures they live under, and more recently, the passports they carry, have changed.

Today Kurds find themselves living in four separate countries—Syria, Turkey, Iraq, and Iran—modern, sometimes artificial borders superimposed on their traditional lands. The majority of Kurds are Sunni Muslims, but some are Christians, Zoroastrians, and Yazidis. They speak a range of Kurdish dialects, but most also speak the dominant language of their country of residence: Arabic, Farsi, Turkish, etc.

Syrian, Turkish, Iraqi, and Iranian Kurds are minorities in the countries in which they find themselves. They have suffered multiple genocides in their history, but they continue to hold onto their common identity.

The Kurds are naturally impacted by the culture around them, but they have never stopped thinking of themselves as Kurdish first—wanting to regain political autonomy and sometimes resorting to violence to achieve that goal.

For example, a Kurdish separatist group called the PKK has led a decades-long insurgency in Turkey, causing several countries, including the United States, to label them a terrorist organization.

Unsurprisingly, it also led some authorities to broadly label the Kurdish people as a whole as “enemies of the state.”

The Kurds have also been on the receiving end of an enormous amount of violence. The Turkish military killed tens of thousands of Kurds in early twentieth century massacres. Turkey has at times tried to ban Kurdish customs, language, and traditional clothing.

In the 1980s, Saddam Hussein killed or displaced hundreds of thousands of Iraqi Kurds—committing genocide, launching chemical attacks, imprisoning Kurds in concentration camps, and embarking on a policy of “Arabization” to drive Kurdish populations out of key cities and towns.

None of this violence has dimmed the Kurds’ nationalist aspirations. The Kurds of Iraq have been the most successful in carving out a political space of their own. After the first Gulf War, Iraqi Kurds were able to establish a regional government in 1992, giving Kurdish political parties a semi-autonomous zone inside Iraq.

The price of autonomy

Autonomy came at a steep cost, however, including heavy losses in a civil war, and reprisals carried out by a weakened but still lethal Saddam Hussien.

There are ongoing efforts by the regional government to break away from Iraq, and form an independent country—including a referendum held in 2017—but so far efforts have been unsuccessful.

Kurds in neighboring countries continue to struggle for basic rights to preserve their culture—the ability to speak their language, to give newborns traditional Kurdish names, to pass down their history. Centuries of struggle has created a deep resolve and commitment in the hearts of Kurdish people to preserve their land and culture. And where the priorities of two groups clash—for example, when the Turkish government’s plans for northeastern Syria come into conflict with the plans of the resident Kurdish population—the result is often violence.

In fact, if you’ve heard of the Kurds at all, it’s probably because of violence. Sometimes Kurdish militias have started the violence, like the PKK fighting against the Turkish government.

Sometimes the Kurds have responded heroically to violence, like when Iraqi Kurds welcomed hundreds of thousands of Syrian Kurds displaced by civil war and ISIS. Or when the Syrian Democratic Forces (SDF), a largely Kurdish militia in northeastern Syria, led the militarily successful fight against ISIS. More than 11,000 SDF soldiers died doing so.

Because they are a minority group, Kurds have often relied on partnerships with larger nations for protection. That is a tenuous place to be, and as often as not, the Kurds have found themselves betrayed by those they thought were allies.

During the Cold War, for example, the United States and Iran (at the time, they were allies) began funding Kurdish militias in Iraq, in an effort to discourage the Iraqi government from aligning itself with the Soviet Union. It worked. Once Baghdad pivoted away from the Soviets, the US withdrew its aid to Kurdish separatists, who were then killed by the thousands.

Many Americans remember the US military’s role in helping to oust Saddam Hussien from power in Iraq. What not everyone remembers is what happened two decades earlier, when the US looked on while Saddam used chemical weapons on the Kurdish people. Or after the first Gulf War, when President George H.W. Bush encouraged Iraqis to rise up and overthrow Saddam. Many Kurds (among others) took this to heart and revolted, convinced the US military would rally to their cause. The hoped-for aid didn’t come, and the Kurds were slaughtered until the US imposed a no-fly zone over much of Iraq.

And now, in the Kurdish-held region in Syria—where Turkey has launched an offensive against the Kurdish forces who are continuing to still fight against ISIS—the US has withdrawn both its support and presence from the Kurds yet again.

During times of war and acute oppression, families from Kurdish territory have fled for safer countries to raise their children. You can actually map violence against the Kurds by looking at migration patterns.

Large numbers of Kurdish families began arriving in Germany and the UK in the 1960s, following a coup in Turkey. Families started coming to Australia and the United States in the 1980s, fleeing Saddam Hussien’s campaign of displacement and genocide.

Today, these Kurdish families and their descendants are a vital part of their communities—Nashville, TN is a great example in the United States. Even so, as the world becomes less welcoming of war refugees, the Kurds find themselves more and more alone. Who are the Kurds? It depends on who you ask. But one thing is certain—they are a people continually used and forgotten. And they are a people determined to cling to their heritage and their homeland.

No matter what their future holds, we are determined to stand with our Kurdish friends—and all who have fled violence and persecution.