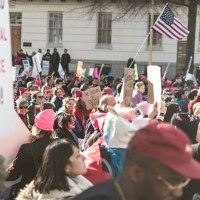 On Saturday, people around the world demonstrated on the one-year anniversary of the Women’s March. They made signs, wore pink hats, and marched for a wide variety of issues.

When I attended last year’s march with my family, I walked away with a sense of solidarity, unity, and togetherness—despite the fact that I didn’t agree with everyone on every issue.

This year was different.

Something was missing, and it didn’t take long to realize what: people of color and other marginalized groups. Not only was their presence diminished—there were remarkably fewer people of color at this year’s march—but also the issues that matter to them.

Nearly every sign I saw was about something that matters mostly to those of us in the majority. My chest felt tighter with each white person I saw demonstrating for their own needs, while seeming to disregard (or be unaware of) the far greater needs of their brothers and sisters of color and those on the margins of society.

I guess the reason it confused me is that I’m used to all of you. You, who so generously give of yourselves to meet the needs of oppressed and marginalized people in other countries, to love “the other,” even to love your enemies. You, who insist we meet people’s needs the right way—holistically, by listening and seeking to understand. You, who make the effort to learn about your sisters and brothers in the Middle East and invest in their lives.

It made me wonder… why is it easier to abandon our own interests and meet the needs of the marginalized and oppressed in faraway places—but when it comes to issues and conflict in our own country we tend to focus more on our own wellbeing? Our own rights? Our own issues?

Many of us believe we ought to make personal sacrifices to help those on the margin in Iraq and Syria. But isn’t the same is true where we live?

A few days before the march, a dear friend of mine texted me to tell me that she couldn’t bring herself to attend this year. As a person of color, she’s exhausted from unsuccessfully trying to convince people that her experience matters. For her, being surrounded by people with power who continually bring their experiences and injustices to the forefront, while letting those with less power, who’ve experienced greater injustice, fall to the back would only make her sad and frustrated.

I told her that made sense and that I was sorry her experiences were so painful. I decided to carry a sign that wasn’t about me, in her honor. Since she was too tired from her everyday experiences of injustice, and I have the luxury of not having to deal with that as much, I would pick up her banner. I told her to rest… and then come take the lead again when she feels ready.

This isn’t really about the Women’s March. This isn’t about whether you would or would not have marched. This is about something much bigger.

It’s about the fact that if things are going to change for marginalized people, their issues, perspectives, and experiences have to be brought to the forefront of our conversations. Those with the most power—those in the majority who experience fewer everyday injustices—have to show up and listen. White people. Men. Those who are relatively wealthy. Straight people who have traditional gender identities. Able-bodied people.

We need to listen until we so truly belong to one another that their pain becomes our pain and their issues become our issues.

If we are going to center the needs of the oppressed, marginalized, and unloved in other countries, let’s do the same in our own. Let’s put our issues on the backburner and focus on the needs of others—people of color, particularly women—until their voices and their communities hold equal value, power, status, and sway.

Unity, justice, equality… they start here, when people like me stop making it about us.