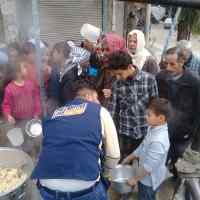 It doesn’t take long for a group to form at the back of the delivery truck. Men and women, boys and girls, they come with empty containers ready to be filled. Each one lives in a Syrian neighborhood devastated by war. Each one is hungry—and you are making sure they get hot meals to eat.

As soon as the lids come off the huge pots of rice and beans, a cloud of steam rises. The young ones in line crowd close, inhaling familiar smells that make them feel safe and cared for.

This year our focus is remaking home. Together, we are helping Iraqis and Syrians devastated by war to rebuild their lives in very practical ways:

Every project comes out of listening to local families, understanding their needs, and bridging the gaps keeping them from rebuilding stable lives.

But in some cities in Syria, war still dictates daily life. Government forces, opposition militias, ISIS members and soldiers from allied countries determine where bombs will fall. They determine whose homes and businesses will be destroyed, whose field of winter wheat will be sown with landmines, and who will struggle to carry on another day.

In these places, it is the vulnerable who suffer the most. You continue to show up for them, with hot meals and love.

Noor didn’t know what she was getting into when she got married. Well, who really does? But Noor was just 13 years old when she was married and took on the responsibilities of a household. In her corner of the world, it is customs and traditions that dictate when a girl gets married, and not her own hopes and dreams.

Those customs and traditions weren’t enough to keep a miserable marriage together. And for Noor, life as a 19-year-old divorced, single parent—it’s not easy. She still takes her responsibilities seriously. She supports her child and her parents, who she lives with again. But it’s a lot of responsibility for a teenager living in a city torn apart by war, where life isn’t yet stable, and jobs are scarce.

Before Noor heard about the hot meals we provide in her neighborhood, her best efforts weren’t enough for her child, and malnutrition was affecting her son’s health. But now, Noor is able to get healthy meals daily for her son and parents. Her son’s health is improving every day, she tells us. It’s the best kind of feedback to hear.

When Abu Mohammad was a younger man and thought about his old age, he always imagined it the same way: the long years of working hard would provide for his needs—his home and furniture long ago built and paid for, savings tucked away for daily expenses, and a son and grandchildren to visit him.

But this? He never saw this coming. He never imagined that his son would be killed in war, that his savings would be wiped out, and that as an old man, he would be responsible for finding enough food to fill the stomachs of his hungry grandchildren. This isn’t the way it was supposed to work!

“When it’s time to relax, and enjoy my children and my grandchildren, life became so hard on me. It’s so unfair,” Abu Mohammad tells us, with tears running down his face. “I lost my son, and I saw his children become orphans. I don’t know how I will feed this big family.”

The shock and shame of sudden poverty after a lifetime of working hard—it is almost unbearable.

You make it a little more bearable. Thanks to the hot meals you provide, Abu Mohammad can feed his grandchildren, and goes to bed each night confident that no matter how hard things are the next day, at least they will all eat.

When the area settles, and when the bombs stop falling, we will be there to help remake home. Together we will support Syrian families as they look ahead into more certain futures. Until then, we will stand with Noor, with Abu Mohammad in their daily search for food. We will stand with the hungry ones, with huge pots of hot food and love.

Help us serve hot food to the vulnerable in Syria.