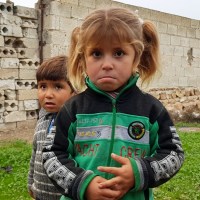 The question has probably crossed your mind…why don’t Syrians in danger just flee? You might even think to yourself, that if it was your family—if it was your children whose lives were at risk—you would grab your babies as fast as you could and run with everything in you!

And you would, no doubt.

You would buckle your kids in your car, quickly pack your most prized possessions into any available space, double-check to make sure you had your bank card, credit card, and phone charger, head for the nearest highway and go.

Leaving from Syrian villages is a little more complicated.

Not all families in villages have a car, so they rely on there being enough space in a neighbor’s car—when their car is packed with their own family. Some families can hitch a ride on passing trucks. Some find a ride with soldiers going the same direction. And some walk… which brings another whole set of complications. Young children can’t walk very far. Neither can elderly parents and grandparents. How do you take the sick? And how do you leave them behind?

For families fleeing, there is rarely time to gather up prized possessions… and besides, their arms are often filled with children. There isn’t a way to carry old family photos or other keepsakes, forget about extra formula or diapers for the babies.

Bank and credit cards? Nope. Many families in rural villages don’t have savings that are easily accessible. Their wealth is tied up in their house, their land, their crops, and their flocks. These are not easy to cash in, especially in the midst of war. When their houses are bombed, when their flocks are stolen, when their land is planted with mines, and when their crops are burned—their savings are gone. It’s one of the reasons why so many men stay behind to protect their properties—the chance to come back to an intact home is slim. What isn’t bombed is robbed. If they leave, there will be no one to protect their home.

Head for the highway? Not safe. Between bombings, armed checkpoints, and Turkish-backed militias targeting travelers for death, highways are not the route to travel. Families have to go slowly on back roads, village by village.

And even if they do get on the road, what then? Will they make it to a safe town? Go to another part of the country where you might be at best unwelcome, or at worst, arrested for not volunteering to join government forces? Will they make it to a border, and if so, will they be allowed in? Earlier this week smugglers were offering to take people across the Iraqi border for $300 each. That’s about a month’s pay—far more than most residents in this area can afford.

Many Syrian families are reluctant to even try to flee to another country. They know what awaits them. The Syrian civil war has gone on for years now. Family members and neighbors fled before them. They know how hard life is in refugee camps. They know how hard it is to go through freezing winters and scorching summers in a tent. At least at home, they have a chance to survive with a little more dignity. A chance.

Above all of the logistical reasons why fleeing is difficult, there is still the most painful reason: it’s home. The Kurdish people are part of a long legacy. They fight for their land, just as their grandfathers and great grandfathers did. Their ancestors for so many centuries fought and died so that today’s generation would be able to live on this land. To leave would be to throw all of that sacrifice away.

Why don’t families in northeastern Syria just flee? Why are families in Syrian refugee camps in Iraq collecting blankets and sleeping mats, diapers and formula to send back to those still in Syria? Because for many, leaving is too high a hurdle to climb.

When families can’t run from the violence, we run to them. With mobile clinics to bring crucial medicine and trauma care. With ready-to-eat food packs for families. We come to the frontlines because we know some families don’t have the option or the means to leave, but they need someone willing to come to them, to show up right where they are.

Join us on the frontlines for our friends in Syria. Give now.

I want to give to save lives in Syria.