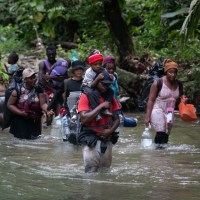 Although Haiti has experienced more than its share of crises recently, including the assassination of its president, an earthquake followed days later by a hurricane, and rampant gang violence, Haitians have been on the move for years, in search of a better life. Waves of people left Haiti in the 1970s during President Duvalier’s repressive reign, after the 2010 earthquake and again after Hurricane Matthew struck in 2016. Some set out for the United States, but others tried their luck in Brazil, and then Chile.

Brazil and Chile became less welcoming to Haitians around 2017 when both countries’ economies worsened and anti-immigrant presidents were elected. The situation further deteriorated in 2020, when COVID-19 stalled both countries’ economies. In Brazil, Haitians work longer hours for less pay than their Brazilian counterparts. In Chile, racism is blatant. Forty-seven percent of Haitians living in Chile experienced workplace discrimination in 2019. Nowadays, when Haitians do find jobs, the Chilean government blocks their work permits.

As life in Brazil and Chile becomes more difficult for Haitians, some have decided to uproot again and make their way north, to the US. This is not an easy decision. They have already been displaced from where they were born, from their kitchens, where grandmothers, sons and daughters, and grandkids shared pumpkin soup on Independence Day, from the sweet perfume of ripe mangoes signifying the height of summer, from visiting their loved ones’ final resting place on All Souls Day,  traditions rooted in ancestry. Relics of a life lived.

They join the newest migrants on the run from Haiti’s all-pervasive gang violence. Although how they get there differs, most Haitians will pass through Colombia and Panama on their way north. H. spoke to us in southern Mexico on conditions of anonymity. He had migrated from Haiti to Brazil three years ago as gang violence made life in Haiti unlivable. He decided to leave Brazil a year and a half ago because he wasn’t making enough money to send home to his widowed father. (About one-third of Haiti’s GDP comes from remittances.) He remembers the men with guns and machetes who robbed, raped, and murdered migrants as they crossed the Darien Gap in search of a better life. Stepping over dead bodies traumatized H. because of how closely the ancestral spiritual world is entwined with the physical world in Haitian culture. There was no priest to pray over those fallen bodies to release their souls so that the deceased could be at peace and offer guidance to their family as a spirit.

Migrants used to transit through Colombia and Panama as quickly as possible, but with such a large increase in the number of migrants crossing, Panama has enacted a flujo controlado or controlled flow, in coordination with Colombia and Costa Rica. The controlled flow has caused bottlenecks in Colombia and Panama as far more people arrive at each destination than are allowed to leave. Migrants waiting to cross the Darien Gap sleep on the beach in the Colombian town of Necoclí if they can’t find or afford rooms to rent. If they survive the journey across the 93-mile jungle separating Colombia from Panama, they are taken to camps in southern Panama to be screened, registered, and vaccinated by the Panamanian government. As of October 1, 2021, Panama reported another 60,000 Haitian migrants are on the way from Guatemala. Now migrants try to sneak into Mexico in groups of 10, 20, or 30 to avoid detection by the Mexican government.

Residents of Necoclí have mixed reactions towards migrants. Some shopkeepers are grateful for the added business after the pandemic. Others resent the migrants, saying they scare away tourists with their trash left on the beach. Many locals have been forced from their own homes, as landlords prefer to rent to migrants who pay in US dollars. Migrants have almost doubled Necoclí’s population. As a result, there are water shortages and the town’s only hospital is overwhelmed treating sick Haitians arriving daily.

The last country migrants travel through before they reach the US is Mexico. We met Ricardo (not his real name) from a shelter we are supporting with food, hygiene, and baby product distribution. Ricardo, easy-going and good-natured, left Haiti in 2019 when gangs took control of the road leading from his house on the outskirts of Port-au-Prince to the city. Because he needed to work along his journey, he didn’t arrive in Mexico until February 2021. He said his treatment in Mexican detention centers was “pretty good.” There are showers, people are allowed to change their clothes, and they are given food. Ricardo’s experience was clouded by racism though. Black people are segregated from other migrants. Racism is also an issue at shelters, where Black people are also separated from other migrants, have been denied food by shelter leaders, and have been mistreated by other migrants who are not Black. Segregation is sometimes an issue in Mexican cities too. For example, Haitians in communities overwhelmed by the sheer numbers of migrants have been told to wait in separate lines at banks when they want to receive money from abroad. The wait for service can last for days.

Ricardo arrived in February and started the process for a humanitarian visa. His interview appointment to receive the visa is not until November. In the meantime, he cannot leave the state. The same would be true if he had applied for refugee status, and migrants are required to check in while waiting for their decisions. If they leave the region, their applications are automatically canceled, and they cannot apply again.

Waiting for a decision used to take two to three months; now, it takes one to two years. If a migrant needs to work to feed his family, he has to apply for a separate work permit, which now takes six months to one year to obtain and is only valid for three months. These delays in processing make survival almost impossible.

The pressure the US has exerted on Mexico to keep migrants from reaching the US has caused a bottleneck of migrants in Tapachula, Chiapas—the poorest state in Mexico, where few job opportunities existed for locals even before tens of thousands of migrants began to arrive. Currently, 19,000 Haitian migrants have applied for protected status and are stuck in Tapachula, where they are detained by the National Guard who block the roads heading north. Frustrated by the long delays which make following asylum procedures seem futile, a lack of aid, no freedom of movement, and human rights abuses, thousands of migrants have revived caravans. On Saturday, October 23, 2021, 3,000 migrants organized and started trekking north in large groups.

Violence, poverty, repression, and natural disasters are color-blind. They have forced people of every creed and color from their homes in search of a better life. Who hasn’t wanted to better his life or the lives of his children? When we belong to each other, we want that better life for one another, regardless of where we come from.

This is the third in a series of posts that explore why our Haitian friends in Mexico, struggling to find a secure place to call home, are in the situation they are today.