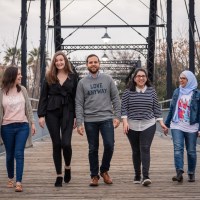 It’s not your imagination. We really are this divided.

It’s not just a US phenomenon either. Polarization is spreading across the globe. Brexit in the UK. Resurgent nationalism in India and parts of Europe. Protests in Hong Kong, Brazil, Iraq.

Our world is more connected than ever, yet many of us feel more divided than we can remember.

In the US, the number of Republicans and Democrats who see each other not just as political foes, but as an existential threat to the country, has increased anywhere from 20 to 30 percent in recent years, depending on which party you belong to.

According to the Harvard Business Review, polarization affects even the way we work and shop. Most people are willing to work for less money if it means they don’t have to interact with someone who sees the world differently than they do. Three out of four would refuse a higher payment for something that might benefit someone on the other side.

But the effects of our division are not just economic. In the US, violent crimes fueled by hate reached a 16-year high in 2018, according to FBI statistics. And in places like Iraq, Syria, and Venezuela, we have already seen where years of sectarian division, left unresolved, can lead us: whole countries, devastated by conflict.

We ignore our division at our peril. But the future is not a foregone conclusion. There is something we can do.

If we lean into what’s tearing us apart, if we take time to understand why we’re so divided—and crucially, if we remind ourselves that this actually is not the worst it’s ever been, and that it can get better—then the door can open to another way of living and being and relating to one another.

Why are we so divided?

It’s tempting to look for some external culprit to explain our division—social media, cable news, our political leaders in Washington or London or New Delhi. But the real causes of polarization live inside us. And, no, they’re not all bad.

Ironically, we are polarized because we’re lonely.

In one study, nearly half of those surveyed said they feel alone some or all the time. More than half feel like no one knows them very well. The younger you are, the lonelier you are. (And no, social media usage is not a predictor of loneliness, at least not according to this study.)

We are wired for connection with each other. But we’re also wired to sort, to identify “our” people. Those who look like us, pray like us, vote like us—or just generally think like us.

This is not, in itself, a bad thing. In fact, it’s essential to human development, to moving past the natural egocentrism of our infancy. We are not born with the ability to distinguish between others and self. It’s something we learn. Not surprisingly, the first “other” we connect with is the “other” that is closest to us. Our family. Faith group. Neighbors. Those who nurture us in our most vulnerable, formative years.

The problem is when we don’t continue developing our ability to connect, to reach beyond just those who are like us. Without this, our definition of “us” is increasingly shaped by our fear of “them,” of those who are not like us.

We miss our chance to connect with the wider world in all its magnificent diversity.

Many of us never move beyond our silos of homogeneity. Three-quarters of whites do not have a single nonwhite friend. Geographic polarization—where we choose to live in neighborhoods that reflect us economically, racially, or politically—is at its highest point in the US since the Civil War. Our social media feeds are carefully curated so we don’t have to hear opposing points of view, unless it’s to ridicule them.

In an op-ed for The Washington Post, social scientist Arthur Brooks identifies the inevitable consequence of this way of being: “If I am unwilling to interact with people who hold—or might hold—the opposing viewpoint from mine, I have cut way back on the number of people with whom I might make a meaningful human connection.”

We are wired for connection. But if we only seek to connect with those who are like us, our world will be smaller, lonelier, and more polarized.

In fact, polarization is slowly killing us, even when it doesn’t lead to all-out war. According to the Greater Good Science Center at UC Berkeley, polarization makes us less likely to help one another, increases stress and anxiety, and can even affect our physical health.

But it’s not as bad as you think… and there IS something you can do.

Sign up to get our full guide, including 4 steps to take now to build bridges where you live.

Get the guide now.