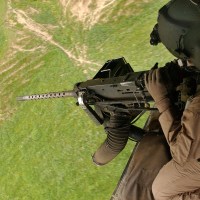 Will the US Finally End Its War Against Iraq?

The US is considering a bill to repeal the AUMF—the congressional resolution presidents have used to take military action without congressional approval. What does this mean—especially for the people of Iraq?

Can you still be at war years after declaring “mission accomplished”? Yes, you can.

It’s been nearly ten years since the United States officially declared an end to the Iraq War.

Nearly ten years since the US military withdrew active combat troops from Iraq, burned bases and supplies deemed too expensive to ship elsewhere, and closed a chapter on eight years of warfare that killed more than 120,000 Iraqi civilians.

But that wasn’t quite the end of the Iraq War story. The relationship between US and Iraqi governments has changed a great deal  over the last decade. US military bases in Iraq (some of the nearly 800 military bases around the world) are now connected to those of Iraqi national and regional militaries. American soldiers stationed in Iraq are officially called “advisors,” “trainers,” or “support staff.” They are tasked with equipping the local military to handle threats posed by groups like ISIS.

Today, the US considers the Iraqi military an important partner in their fight against terrorism. On the surface, it can look like a mutually beneficial relationship.

But looks can be deceiving.

Supporters of the 2002 bill said invasion was necessary because Iraq had “significant chemical and biological weapons capability” and was “actively seeking a nuclear weapons capability.” Both claims were later proven false.

Presidents from both parties have used the resolution to justify taking military action without congressional approval—not just in Iraq but other parts of the world as well.

What does it mean, especially for the people of Iraq? In the most practical terms, the US has been facing Iraq with the promise of partnership held out in one hand, and the threat of further war held in the other.

All that could change soon. The joint resolution authorizing the 2003 invasion of Iraq is on the brink of repeal. The US House recently passed a bill to repeal the AUMF with bipartisan support—from Democratic Representative Barbara Lee who opposed authorization in 2002, to freshman Republican Representative Peter Meijer who served in Iraq. The Senate is set to take up a similar bill soon. President Biden—who voted for the 2002 bill when he was a senator—has signaled his support for repeal too.

It is anything but a symbolic gesture.

The Iraq War triggered a brutal insurgency. It paved the way for ISIS’s rise to power. Iraq has yet to recover from the aftermath of the 2003 invasion. To this day, it cannot fully participate in the global economy, putting long-term stability out of reach.

Repeal will not remove all US military troops from Iraq. “We still maintain tens of thousands of forces in the region, we still have forces in Iraq and Syria, those forces aren’t leaving. We still have our bases in the countries of our Gulf partners, they aren’t shutting down,” as one US official said last week.

Repeal will not undo the damage already done.

It will not magically make the world safer.

It will not guarantee a more peaceful future for our friends in Iraq and other war-torn places.

But it will make it harder for presidents to unilaterally wage war, and makes a more peaceful future possible.

If passed, repealing the AUMF will make it possible for Iraq to come out from the shadow of a law that gives the US license to bomb, invade, and occupy Iraq’s sovereign territory at will, to this day.