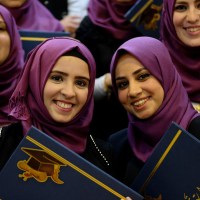 There is a bridge in Mosul, Iraq, that spans the Tigris River—one of the few that connects both sides of this once mighty city. The others are still destroyed, broken monuments to the long, brutal war with ISIS.

Every day, young women and men navigate the still-ruined Old City and cross this bridge on foot. On the other side, they step into their future.

It’s not a handout they’re after. It’s an opportunity. And they’re finding it at a place called WorkWell.

Here in Iraq, opportunities that most of us take for granted are much harder to come by.

Try getting a credit card here. Or opening a bank account. Especially if you’re displaced.

Years of sanctions crippled Iraq’s economy; the effects still linger today. That’s to say nothing of 15 years of war and the toll it’s taken.

Most young people who come to WorkWell don’t have access to credit. They don’t have bank accounts. Which makes it impossible for them to enter the digital marketplace outside Iraq.

The local economy can’t offer enough opportunity to go around, and the opportunities that exist beyond their borders are out of reach.

Traditional solutions to poverty do not always work in a place like Iraq. The barriers are too high to climb over. So we have to provide a way around them instead.

WorkWell gives refugees and survivors of war the chance to work anytime from anywhere, with just a smartphone or a laptop and an internet connection. We partner with the private sector to provide alternative payment solutions so students can find—and be paid for—their work in the digital marketplace beyond Iraq.

WorkWell literally links refugee students to a world of opportunity.

We offer 8-week courses in English, accounting, web design, coding, and IT. We teach students how to start their own freelance businesses, and we provide real work opportunities with clients such as Microsoft.

We are equipping the next generation of tech leaders—and we’re doing so in one of the most war-torn places on earth.

We’re also changing the face of the tech sector as we do so. Literally.

The Middle East is not often seen as being on the leading edge of women’s rights. But if we want to talk about patriarchy and gender disparity, we should look no further than the tech sector in the West.

At our four WorkWell campuses in Iraq last month, 53% of the students we trained—more than half—were women.

This is not by accident or coincidence. When we select students for WorkWell from refugee camps and war-torn communities across Iraq, we look for the brightest, most capable women. (And we don’t have to look far.) We offer transportation and other support if needed, so women with children do not have to choose between their families and their future.

WorkWell is doing something that the biggest, most powerful tech companies haven’t managed: giving women equal space at the table.

At a recent WorkWell graduation in Mosul, several of the student speakers were women—raising their voice in the very place where ISIS tried to silence them. You could see the ruins of the Old City from the celebration hall where we hosted the graduation. The legacy of ISIS offered a jarring backdrop to a picture of Mosul’s future.

WorkWell is helping women who survived war discover a new identity, a new sense of calling—and to claim their equality with their male peers.

At a recent WorkWell graduation, Heja, the campus manager closed with these words:

As 2018 draws to a close, we will graduate our 1,000th WorkWell student. Just over a year since opening our first campus in northern Iraq, you’ve helped give 1,000 displaced and vulnerable students a new start. At least 40% of these students already have a way to earn income now, and even more will in the days and weeks to come.

But the need in Iraq is massive. The wounds of war are so very far from mended.

So in 2019, we’re expanding WorkWell again, pressing into smaller communities where it’s even harder for young people to find opportunity. It’s in communities like these that extremists and paramilitary groups alike have found a steady supply of recruits—because they’re often the only opportunity to earn a steady wage.

These students need a place to belong that isn’t tied up in religious affiliation or ethnicity, that doesn’t discriminate based on gender or how much education you have. They need a place that offers them a different identity. Coder instead of fighter. Designer instead of warrior.

In the coming year, we’ll open as many as four new WorkWell locations—including, if possible, our very first campus in Syria.

Each new location costs about $25,000 to launch. Which seems like a lot—until you think of it another way:

We can be their village. We can jump-start their future. We can take WorkWell deeper into Iraq—and even Syria—giving young people a chance in the very places where extremist groups prey upon the lack of opportunity.

Give today to help thousands of young refugees restart their careers after war.

Tagged: End of Year women in business in Iraq WorkWell