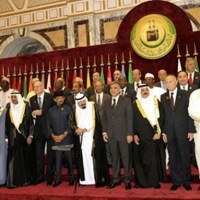 Two of the leading voices in the Muslim world denounced the persecution of Christians in Iraq at the hands of extremists proclaiming a caliphate under the name Islamic State.

The most explicit condemnation came from Iyad Ameen Madani, the Secretary General for the Organization of Islamic Cooperation, the group representing 57 countries, and 1.4 billion Muslims.

In a statement, he officially denounced the “forced deportation under the threat of execution” of Christians, calling it a “crime that cannot be tolerated.” The Secretary General also distanced Islam from the actions of the militant group known as ISIS, saying they “have nothing to do with Islam and its principles that call for justice, kindness, fairness, freedom of faith, and coexistence.”

Meanwhile, Turkey’s top cleric, the spiritual successor to the caliphate under the Ottoman Empire, also touched on the topic during a peace conference of Islamic scholars.

In a not-so-veiled swipe at ISIS, Mehmet Gormez declared that “an entity that lacks legal justification has no authority to declare war against a political gathering, any country or community.” He went on to say that Muslims should not be hostile towards “people with different views, values and beliefs, and regard them as enemies.”

Their remarks come at a time when Christian leaders in Iraq have called on Muslim leaders worldwide to denounce the anti-Christian violence in the country. In the past decade, the majority of Iraqi Christians have either fled the country or taken refuge in the autonomous region of Kurdistan.

The declaration of a “caliphate” by Islamist militants in Iraq lacks legitimacy and their death threats to Christians are a danger to civilization, Turkey’s top cleric, the successor to the last caliph’s most senior imam, said.

Islamic State, an armed group formerly allied to al Qaeda that has captured swathes of territory across Iraq, last month declared its leader, Ibrahim al-Baghdadi, “caliph”—the historical title last held by the Turkish Ottoman sultan who ruled much of the Muslim world.

“Such declarations have no legitimacy whatsoever,” Mehmet Gormez, head of the Religious Affairs Directorate, the highest religious authority in Turkey, which, although a majority Muslim country, has been a secular state since the 1920s.
“Since the caliphate was abolished … there have been movements that think they can pull together the Muslim world by re-establishing a caliphate, but they have nothing to do with reality, whether from a political or legal perspective.”

Gormez said death threats against non-Muslims made by the group, formerly known as Islamic State in Iraq and the Levant (ISIL), were hugely damaging. “The statement made against Christians is truly awful. Islamic scholars need to focus on this (because) an inability to peacefully sustain other faiths and cultures heralds the collapse of a civilization,” he told Reuters in an interview.