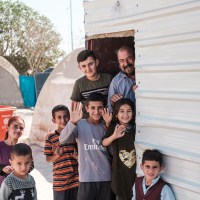 Shops like this are commonplace in camps around northern Iraq. You could call them convenience stores. They’re not as well-stocked as your local 7-Eleven, but they serve the same purpose: to have a little bit of everything that might be needed by the community around it.

Life in a displacement camp is hard. All that shelters you and your family from scorching summers and freezing winters is a plastic tent. Most of the time, one tent houses every single person in a multigenerational family. Most families come to camp with very little, or nothing aside from the clothes on their backs.

Unemployment in Iraq is very high, especially for youths, which is one of the factors that recently led to massive protests all across Iraq. And unemployment in camp is exponentially higher than that of regular society. Displaced folks face myriad barriers to getting jobs—a lack of local knowledge, language, skills, and social connections that are vital to thriving in most aspects of Iraqi society.

For Baper, a Yazidi that was displaced from his home in Sinjar after ISIS came to wage genocide against his community, this shop is a lifeline, and a way forward.

Baper has a big family. Eleven kids. The eldest of his sons has thalassemia, a blood disorder where the body doesn’t produce enough of the protein that carries oxygen in the blood.

Four other children have hemophilia, a rare disorder where blood doesn’t clot normally. This means that the cuts and scrapes that are a normal part of childhood—especially for active boys—can frequently be medical emergencies in Baper’s family.

These conditions are congenital, and depending on how severe they are, carry a lifetime of complexity. Baper spends a lot of time in and out of hospital with his children, having a job that brings him outside of the home is difficult—because he never knows when he might need to rush a child to the hospital.

When we met Baper, one of the things he said was, “Life is better here in camp.”

Unlike most families displaced by war, this family ended up in a much more convenient place. There is a big public hospital nearby that specializes in treating children’s blood disorders. This is a resource that was not available to Baper’s family in their home town, where treatments were only “bandaid” solutions, until Baper could get his kids to the big urban hospitals. Except he simply couldn’t afford to at the time.

So here in camp, near an urban hospital, Baper’s children are now much closer to the vital medical care they need to treat their disorders.

Baper’s situation is unique. Because he needs to stay close to home to help take care of his children’s needs, it’s harder for him to find work than most displaced men.

Our job creation program is based on the cornerstone of listening, and supporting individuals to come up with solutions for their unique situations. When you donated so Baper’s family could have this convenience store, you did so many important things:

You helped his family earn an income.

Before this, unable to find work he could do, Baper was borrowing money to feed his family, and relying on the goodwill of his friends and neighbors in camp to make sure that their basic needs were met.

You provided Baper with meaningful work.

Running a business gives Baper something productive to do with his time, alleviating the despair he had been feeling up till then. “Before I had this job I was just sitting and thinking about life, but now I don’t have to think so much, I am busy with the shop.”

You gave Baper’s son a job.

Baper’s eldest son is too weak from his illness to go to school with his brothers and sisters, so he runs the shop with his dad. He’s already acting like a business owner, Baper tells us proudly, keeping his brothers and sisters in line when they are in the shop, making them pay for items just like all the other customers! He’s proud of running the shop with his dad, and wants to have one just like it when he’s older.

You gave his family the resources to plan ahead.

It was very early fall when we visited Baper, and the heat of northern Iraqi summer hadn’t yet abated. But he told us that he had used some of his profits to buy polyurethane sheeting for the shop in preparation for winter, to ward off water leakage that might damage the shop and items inside it. Being able to plan for the future is vital to rebuilding, and for Baper to be able to afford to do this only a few short weeks into business, spoke well of its future success.

You gave Baper a way to give back.

Baper’s family survived because friends and neighbors in his community helped them out in their time of need. This shop is also his way of caring for others who are in a similar situation, ensuring members of his community have something to eat, selling food on credit to families who need it, and then collecting payment later, when they get paid.

Baper is incredibly grateful for everything you’ve done and very, very happy and proud to have a business of his own. He was all smiles when we came to visit him, plying us with colas and fruit juices, saying, “This is for you from my shop.”

It’s overwhelming just to think about all he and his family have survived: genocide, displacement, loss of home, extreme deprivation, and the ongoing fight for survival. Their resilience is humbling, and their ability to find joy despite the circumstances, absolutely inspirational.

Help families like Baper’s find a path forward after war. Give today.