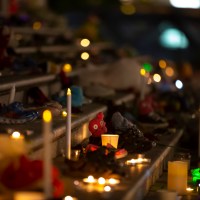 Yes, We Are the Kind of People Who Commit Genocide

Entire communities and generations have faced shocking levels of violence by every country that colonizes. When you forget that we belong to each other, violence is an inevitable outcome.

Except, we are exactly the kind of people who commit genocide.

We tell ourselves that “nice people” don’t commit atrocities, don’t turn the other way, don’t ignore stories of horrific abuse told by those who don’t look like us.

Except of course they do. We do.

The news was shocking for some—the remains of 215 First Nations children discovered buried in a schoolyard in western Canada. In the days that followed, in other parts of the country, the remains of nearly 1,000 more indigenous children were found, also buried on the grounds of schools they were forced to attend.

These will not be the last discoveries, Thousands more childrens’ bodies will be discovered as the grounds of 139 residential schools across Canada—funded by the Canadian government and run by the country’s largest church organizations— properly examined for the first time since these schools were created in the late 1800s.

In all, around 150,000 First Nations, Inuit, and Métis children attended these residential schools. They ranged in age from 4 to 16 years old. We will never know the real number of children who were killed. Some of their bodies were burned in furnaces that took care of school garbage. Some of their bodies were tossed into nearby rivers. Some were cemented into the walls of buildings long ago demolished.

The deaths now coming to light are not the sign of a broken system. They are evidence of a system that worked exactly as designed. In the words of Duncan Campbell Scott, the one-time head of the residential school system and deputy superintendent of the Department of Indian Affairs said:

Our object is to continue until there is not a single Indian in Canada that has not been absorbed into the body politic, and there is no Indian question, and no Indian department.

The extermination of First Nations, Inuit, and Métis people was not an accident—it was the point.

What would make ordinary people create and enforce a system designed to systematically destroy communities through their children?

They didn’t believe that we belong to each other.

Government officials invested in this system to weaken indigenous communities, so they could take their land and resources without having to break legally binding treaties.

Clergy and church members invested in this system to break the spirit of generations, separating children from their families, and converting them from their traditional beliefs to Christianity.

Business owners were happy to support a system that churned out compliant workers robbed of their ties to the land or their traditional ways.

And the rest of us? We were content to benefit from the profits made harvesting resources that did not belong to us.

It seems that no one stopped to count the cost for all of us.

Dehumanization destroys us all

An effective way to destroy a group of people is to convince yourself they are less than human. Canada’s residential school system is thought to be modeled after the motto of an American military leader, U.S. Army Lt. Richard Pratt: “Kill the Indian, save the man.” As if indigenous peoples couldn’t possibly have worth unless they act and believe like “us” Unless they bowed to our demands.

But the most effective way to destroy a group of people is to convince them they are less than human. This is perhaps the most egregious legacy of the residential school system. Not everyone who entered the system was killed. But every child across the country who was put into a residential school was forcibly taken from their families, culture, faith, and language—and was traumatized for years. There were no systems in place to help children cope. Indigenous families and communities were left completely unsupported as they dealt with the grief of losing children with no explanation or body to bury; nor were they prepared to handle the lifelong impact of living in community with adults who were trained as children to loathe themselves.

The devastation wasn’t limited to First Nations people. When we design systems to make racism endemic and efficient, when we abuse others, when we turn our backs on abuse, when we think nothing of profiting off the abuse of others—that destroys something in us, too.

Facing the fact that we belong to each other

First Nations people in Canada are not victims—they are partners and neighbors we continue to abuse; they are brothers and sisters we refuse to treat like they belong. We continue to support governments that plot how to steal resources from indigenous communities. We refuse to adequately support survivor families and instead fund a foster care system that continues to remove children from their communities. We mourn dead children, but turn our backs on the communities still with us.

Genocide isn’t a particularly Canadian atrocity. Or American. We’re quick to point fingers at WWII-era Nazi Germany, or maybe ISIS in Iraq—but entire communities and generations have faced shocking levels of violence by every country that colonizes. When you forget that we belong to each other, violence is an inevitable outcome.

If we don’t change the stories we tell ourselves, if we don’t believe each other to be invaluable members of our community… violence will continue to be the outcome.